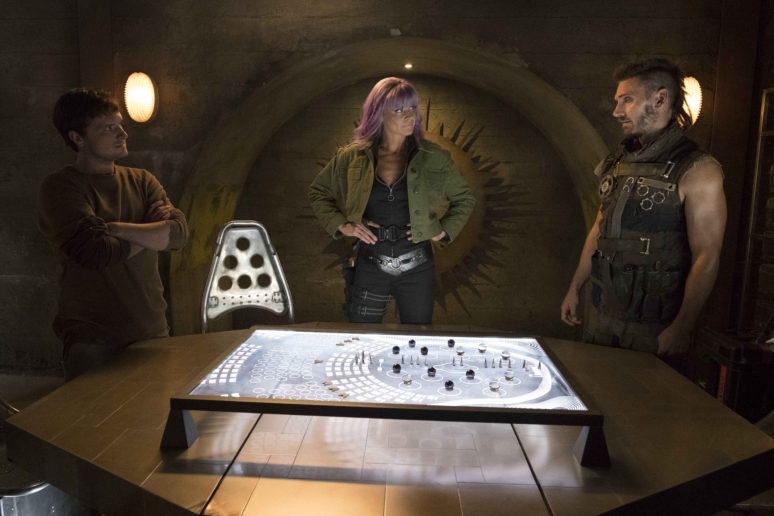 Hulu comedy/sci-fi series Future Man is now in Season 2. This time around, the time-traveling trio — Josh Futturman, aka Future Man (Josh Hutcherson), Tiger (Eliza Coupe), and Wolf (Derek Wilson) — head back to 2162 to see if their humanity-saving efforts have paid off.

Unlike Season 1, in which the team time-traveled often, Season 2 is mainly set in 2162. Wolf ends up living in the NAG (New Above Ground), while Tiger heads off to The Mons (a community of humans preparing for exodus to Mars), and Josh is being held captive at a facility run by a shady group called The Pointed Circle. The three locations are widely different from each other, reinforced by the unique palettes of sounds created by the Sony Pictures Post Production sound team in Culver City, CA, led by MPSE Award-winning supervising sound editor Larry Goeb. 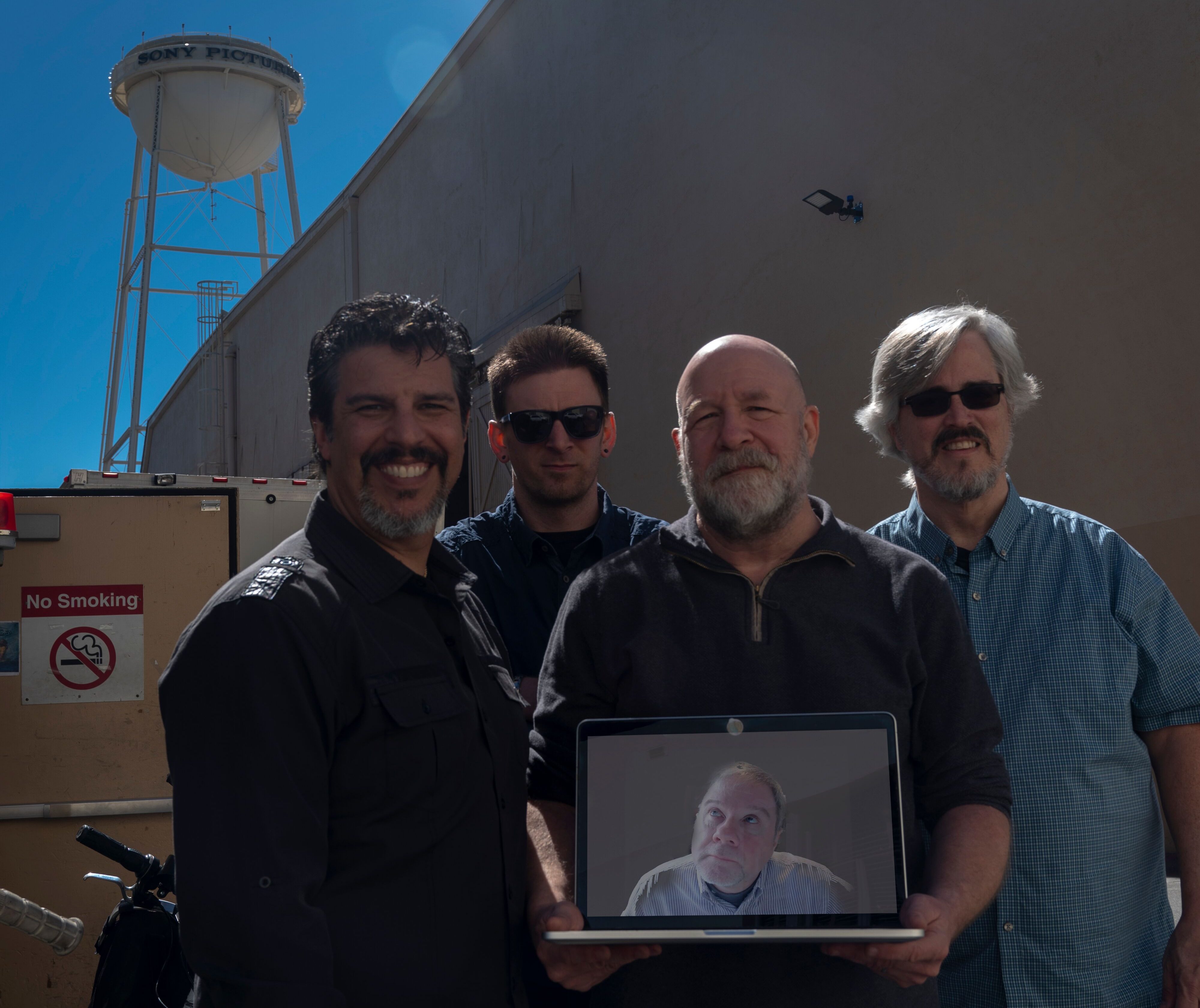 The NAG is a miserable, dystopian community that embraces stone-age technology. The marketplace is filled with primitive craftsmen (Wolf himself is a wheelmaker). Transportation is provided by wooden carts and wheelbarrows. And fire is the only source for heating and cooking. They shun technology so much that prisoners are forced to work in the Smash Pits, where anything electrical or synthetic is smashed to bits by rocks.

In contrast, The Mons is a technology-centric human community run by a holographic version of Stu (Haley Joel Osment). Stu’s residence is a high-tech Mecca. Digital assistants, computer screens, and interactive devices (like a robotic pancake maker) prevail.

Sound designer Mark Petersen concretizes their inherent differences in terms of doors. At the NAG, “their manual doors used lots of metal squeaks and rattling metal impacts to give them a rusted makeshift feel. In contrast, the doors at Stu’s place are solid glass and metal that open smoothly with pneumatics or servo motors and air release seals to establish the isolation of different rooms,” he says. 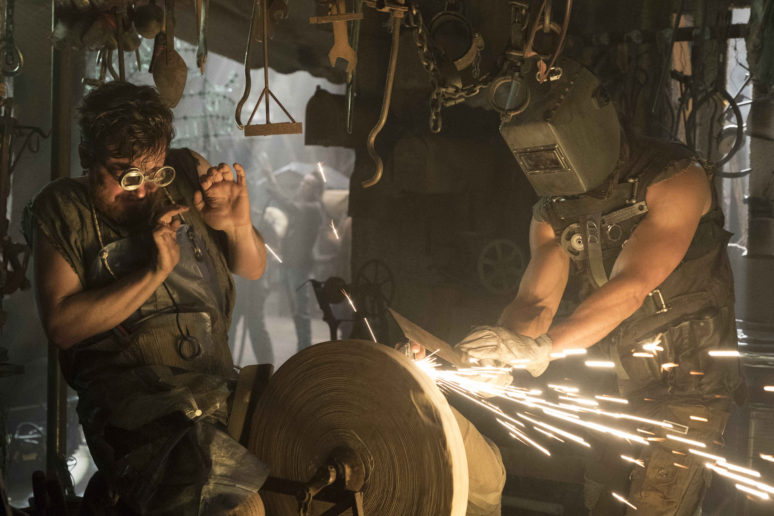 Even though the NAG is a no-tech encampment, there are still plenty of sci-fi elements in the show (especially in regards to holographic Stu and his overlordship of The Mons) and those require loads of VFX. Visual effects are always one of the last aspects of a production to be finalized. This meant the post sound team had to be very creative very quickly.  According to MPSE Award-winning sound designer Mark Lanza, there was a lot of last minute re-cutting and redesigning. “There were cases where we cut sounds to temp visuals, but then we’d see the near-final visuals and it was clear that the sound didn’t work with the new visuals at all,” he says.

One example of that is when Tiger punches the holographic version of Stu in S2, Ep. 2 “The i of the Tiger.” The showrunners — creators/writers/executive producers Kyle Hunter and Ariel Shaffir (known for Sausage Party and Preacher) — wanted a smooth, clean, hi-tech sound for Stu’s hologram being broken up as a physical object, like Tiger’s fist, passes through him. Petersen used very slowed-down record scratches and a vocoded alien voice to create a low-end wobble to sell the overall energy displacement. He ran telemetry beeps through the Waves Doppler plug-in to help add a feeling of fast motion. Thin electric static whooshes and reverbed glitchy digital breakups gave the hologram’s blue glow a high-end shimmer. 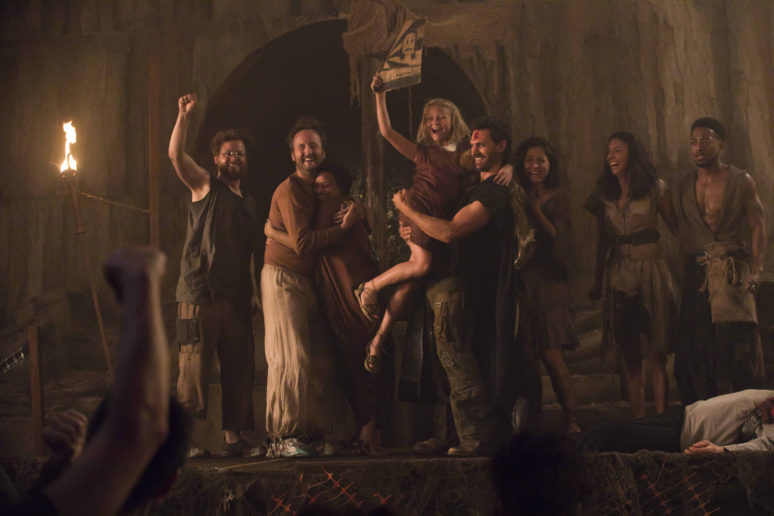 “Part of what gives the show its sound is that the effects haven’t been mulled over for months and months. It’s fresh and of the moment,” says Goeb. “I would joke with the producers that we should just do this show live. I used to do live shows and this show was close to that. We never had a real, final picture with VFX until during the dub, sometimes halfway through the dub. It wasn’t like it came in the night before and we got to work on it. We’d have the dub day scheduled and because of scheduling we’d have to do it that day. Of course, we completed everything we could for the day of the dub, but there were a lot of last-minute tweaks. And it wasn’t last day tweaks, it was last hour tweaks.”

The sound editorial team was always on its toes, and so was the re-recording mix team. With new sound elements coming in with the new visuals, they needed to stay flexible and focused too. Goeb says, “All of this obviously would not have been possible without the professional and accommodating mixing team of Bill Jackson (sound effects) and Ken Teaney (dialogue/music).  Their talent and good humor always made the mixes enjoyable and stress free — making work not feel like work.” 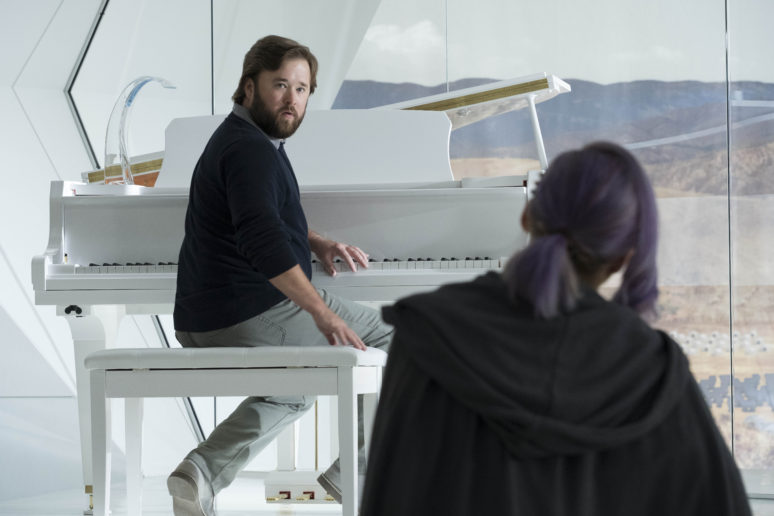 Even with the last minute pressure to finish an episode, Goeb says the showrunners were very complimentary and supportive. “It never got to a point where it was just one person plowing through stuff and not listening to ideas. The show was more of an evolving process,” he says.

Petersen agrees, “The creatives were always open and accepting about what we did and we were able to come up with exciting sounds that complimented the show.”

In fact, nothing was deemed too strange. “Some of the sonic opportunities were pretty far out and getting to hear the creatives play them, and laugh at them, was kind of fun!” says Lanza. 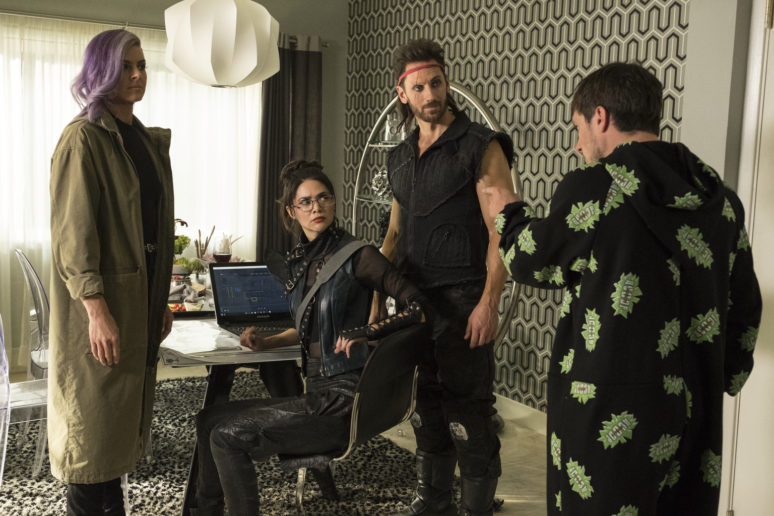 Episode 201: “Countdown To A Prologue”

For instance, there’s a scene in S2, Ep. 1 “Countdown to a Prologue” when Josh realizes that Fox (Lilan Bowden) — a new time-traveler on the team — looks like the girl on the back of the Spoink game box. Lanza emphasized the zoom-in on her picture with an appropriate whoosh-thump. But then he added an unexpected and hilarious long pig squeal over Josh’s face as he realizes that Fox is a fake. Lanza says, “I never thought they would go for the pig squeal in the mix, but they did and I was happy to hear it in the final mix. It makes me laugh every time. It is juvenile and over-the-top. Fits right in!”

Josh returns downstairs and confronts the team of imposters. The more they question Josh about Stu, the more stressed he becomes. Suddenly Josh’s reality begins to melt and flake away in pixilated tiles. For that scene, Lanza achieved a de-res/granular sound by running the effects through a combination of plug-ins including Tonstrum’s Traveler and Krotos’ Dehumaniser and then through iZotope RX to overcook the sound. 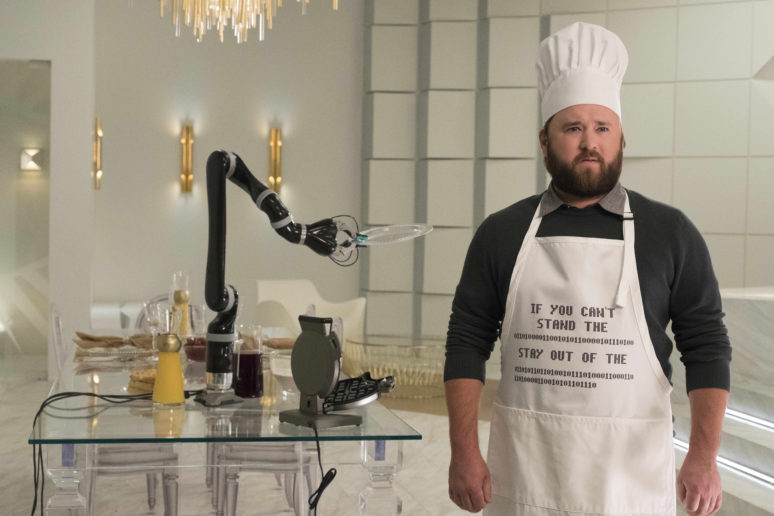 Near the end of Season 2, in Ep. 12 “The Brain Job,” there was another pixelated-reality sound, this time for Stu’s hologram being destroyed. It disintegrates and reforms several times before finally dissipating. Sound effects editor Mike Pipgras layered marbles clacking together with pitch-manipulated robot vocals — a combination that reflects both the concrete and digital qualities of this version of Stu. For pitch processing, Pipgras used Soundminer “because it tends to sound better than most,” he says. “I also used plug-ins by Sound Morph, Waves, and iZotope. You can do a lot of manipulation with iZotope, to really sculpt the sound.”

According to Future Man executive producer Seth Rogen, the series exists in a world where all movies are real. There are references to The Terminator, Pulp Fiction, Back to the Future, The Last Starfighter, Star Wars, and so many more! “Film references come up often, but you can’t actually use the original sound from the films. You have to go back to the original, analyze the main elements, and then create a similar sound. We had a chance to tackle these classic sounds but put our own stamp on it,” says Petersen. 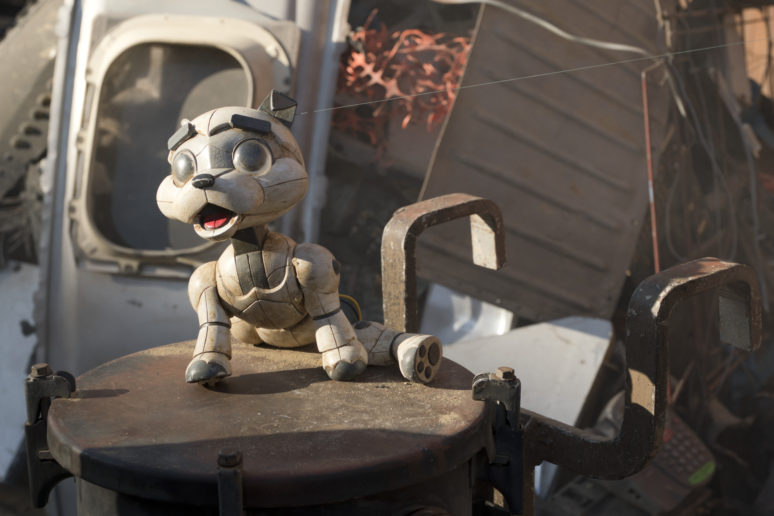 For example, Petersen got to create his own version of a lightsaber-esque sound for Stu’s guard’s weapons, heard in S2, Ep. 9 “The Ballad of PUP-E Q. Barkington.” He ran crackly transformer hums through Waves Doppler to generate a library of whooshes at various speeds. “These were then pitched up but time shifted at different lengths to add more interesting artifacts. The impacts are electrical explosions and phase shifted spark blasts,” notes Petersen.

Also in that episode is one of Petersen’s favorite sound challenges on Future Man — a robot dog. Josh first finds the robot dog while enslaved in the NAG’s Smash Pits in Ep. 6 “The Binx Ultimatum,” and repairs it near the end of Ep. 8 “The Last Horchata.” Petersen used real small dog whines on the robot dog, which allowed him to build empathetic interactions with Josh, as heard during the sowing night in Ep. 9. Petersen elaborates, “Whines and barks were run through a ring modulator and blended with robot vocalizations.  These and toy robot servos were processed through Avid Space to make them all sound like they are coming from a speaker in a small plastic box.” 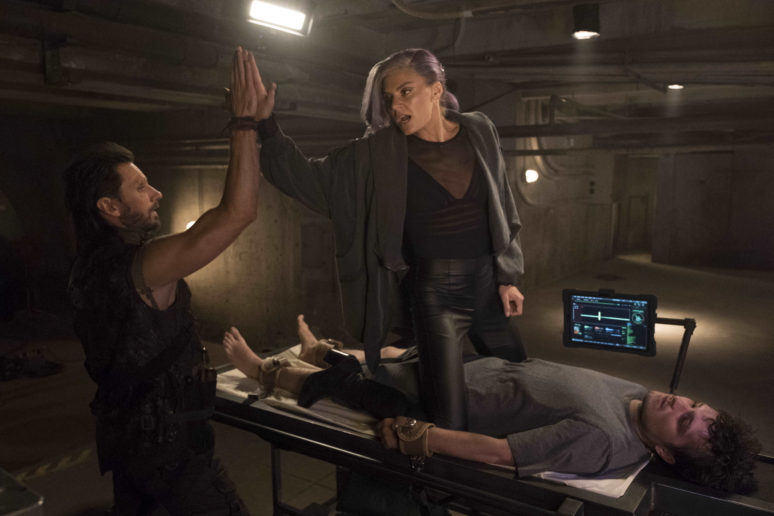 Robots in Season 2 aren’t limited to canine companions. There’s an entire army of killer robots that holographic Stu turns loose on the remains of humanity in Ep. 11 “Dia De Los Robots.” Lanza began work on the kill bots’ sound using tons of servo sounds pitched down and then fattened up in Scheps Parallel Particles plug-in by Waves. Lanza then passed the torch to Petersen, who continued work on the kill bots as the VFX evolved. “I hit all the moves I had at the time, but then the visuals improved and Mark [Petersen] finished them up,” notes Lanza.

Episode 12 opens with the continuation of the kill bot assault. It starts with a POV shot of Wolf slowly regaining consciousness as Tiger looms over him, trying to help him to safety. “It’s a classic Saving Private Ryan moment,” says Petersen, who plays bowed chimes and high-end feedback on Wolf’s awakening. Tiger’s form emerges from the light to the sound of a slowed-down parachute cloth flap blended with a lighter fluid fire burst. Futuristic weapons and resonating laser explosions — pitched down and dulled — signify the battle that’s still happening around them. 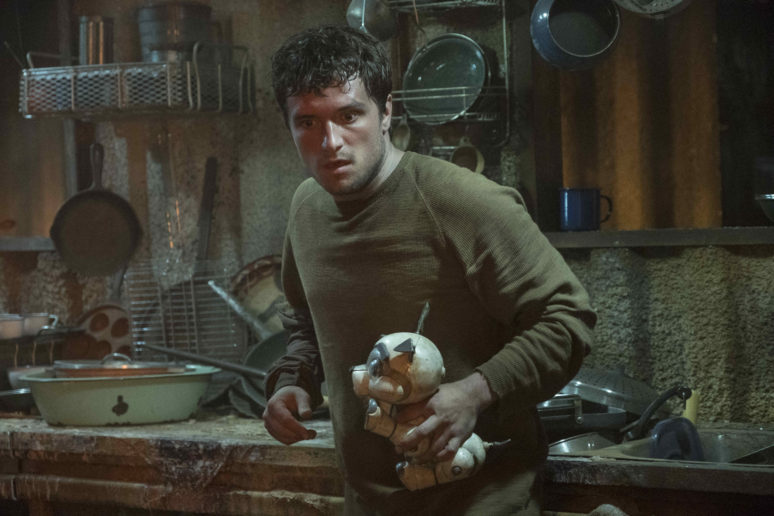 Down in the bunker, the team strategizes their next move as the battle continues above. Petersen uses a variety of muffled screams, laser rifles, and mortar explosions to keep the action present off-screen. Several large explosions are heard, and dirt and debris cascade into the bunker. “Finally, a stuttered rocket launcher wind-up leads to a large explosion that tells the team they’re losing and hope is lost,” says Petersen.

The kill bot assault passed through several hands — from Lanza to Petersen to Pipgras to other effects editors on Future Man. It required a lot of work from a lot of people. It’s truly indicative of the collaborative post sound process on the show. “These guys put in a lot more work than what got used. For every sound you hear in the final there were several versions created in editorial,” Goeb concludes. “One nice thing about Sony Pictures is that all the sound editors can get into everyone else’s space and there are no conflicting egos. There’s a lot of camaraderie and cooperation.”