It’s no strange coincidence that the decade responsible for Stand by Me, Aliens, Goonies, E.T. the Extra-Terrestrial, Firestarter, and Poltergeist also serves as the setting for a Netflix series conceived by twin brothers Matt and Ross Duffer. “They did a lot of research about what was going on back in the 1980s,” states Stranger Things VFX supervisor Marc Kolbe, who previously worked on Where the Wild Things Are and The Last Ship. “You’ll see that in some of the details in the rooms and the toys. It was a lot of fun to work on the project. It brought back a lot of memories.”

Stranger Things revolves around the search for a young boy, which becomes entangled with a covert scientific experiment that has horrifying results. Even with the story’s many otherworldly elements, the creative team sought to minimize the amount of digital augmentation. “The big thing that everyone forgets is how long it took to do everything in practical,” remarks Kolbe. “We ended up having to do a lot of 50-50 deals where we started practically and finished digitally. I don’t like doing everything digitally unless I have to. It is better to have the actors react to something and for the camera operators to see where things are in their world.” 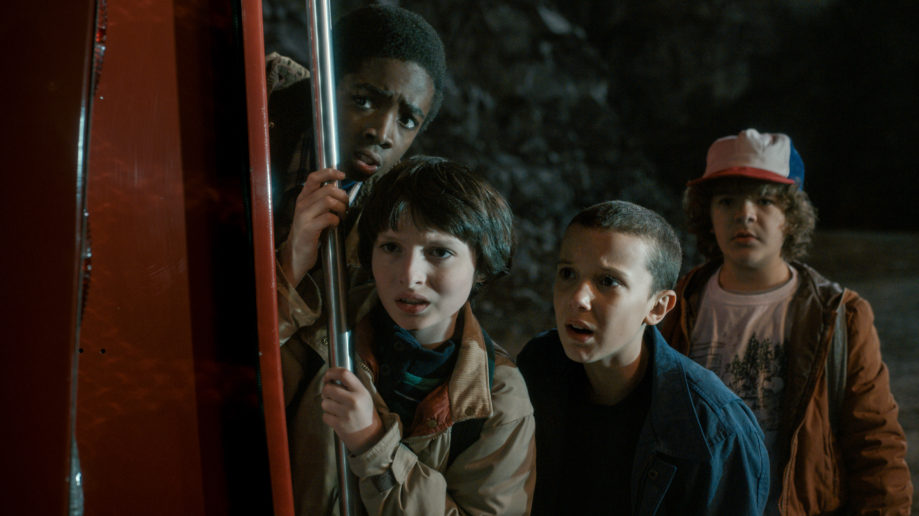 Despite the practical effects mandate, the amount of visual effects shots tripled over the course of the production. “We had about 100 to 200 shots per episode, so that’s 1,600 shots,” notes Kolbe, who had a post-production schedule of five months to handle the eight episodes, all streamed in 4K by Netflix. “For me, it’s like a big feature film because all of the episodes are being made at the same time. Rob Weaver was the co-supervisor, and he was my eyes and ears while we were shooting in Atlanta and posting in L.A. Sometimes we would have two units. We started working the minute they began cutting, and sometimes the minute they commenced shooting, to develop and design shots, especially for the buildings and the Upside Down world.” The Upside Down is an alternate dimension that figures heavily in the story.

“The rift and Upside Down world went to Gradient Effects, which customized procedural software for us,” explains Kolbe. “Aaron Sims Creative [ASC] had set up a division to do creature animation, and Aaron Sims had designed the creature, so it made sense for ASC to do that work. CoSA VFX did the pool sequence with Barb [Shannon Purser] and a few creature shots on the 2D side.” During the location shoot in Atlanta and at Screen Gems Studios, the crew did not utilize green screen much. “The main green screen was the rift, which we put at the end of the stage because characters had to walk through and into another world. Also, there’s a scene when one of the boys jumps off the cliff and is floating in the air.” Some modern-day elements needed to be digitally painted out, but “For the most part,” Kolbe says, “we tried to shoot in areas which didn’t require us to do that.” 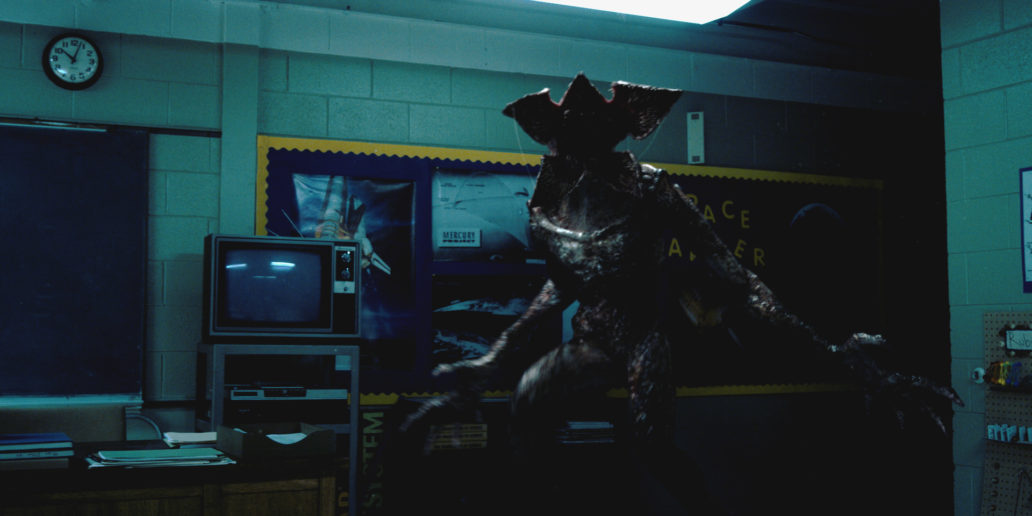 During the series, a predator from the Upside Down dimension causes havoc in the fictional town of Hawkins, Indiana. “Aaron Sims Creative did the creature design before I even came on,” states Kolbe. “Then Spectral Motion built the suit based off of the designs by Aaron Sims. There were some changes that happened because of how the guy in the suit had to operate.” The team made a concerted effort to have the practical monster interact with the cast. “The Duffers wanted the creature to be human-like so that in the shadows it would look like a person. But the extremities, like the length of the arms, are longer compared to a human. When the head is folded up it looks human and opens up like a flower.”

The Upside Down dimension where the creature lives,“was designed hand-in-hand with the art department and special effects,” explains Kolbe. “We drew out some ideas and plans based on the Duffers’ vision. It was this idea of ropes and vines. They referenced Silent Hill for some of the ideas with the spores, and we made it more like a floating dust-like particle system to give it this weird, eerie feel. Then also with the fog, it allowed us to hide quite a bit so we didn’t have to build a huge world. The special effects team built a lot of the vines. We tried to do it as much as possible on the day, on set, before running out of time. We would then hand off to the digital facilities to do the rest.” 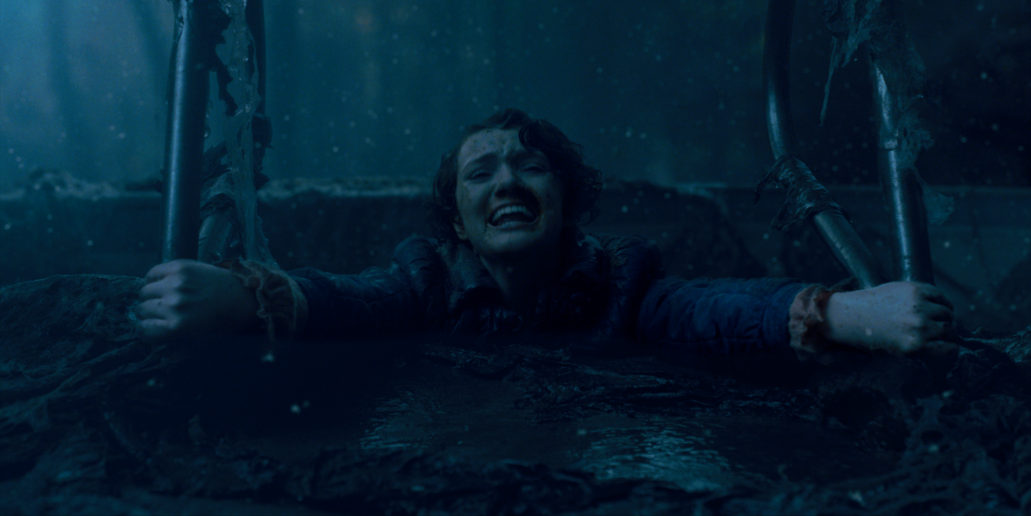 “The lab was a complete set where we had the rift and spores floating around,” remarks Kolbe. “The exterior lab was an abandoned building that we shot and enhanced. We added the satellite dishes and the parking lot. The building was rebuilt digitally so that it worked for the scenes that they wanted to shoot. When you see the military building through the trees, that wasn’t there. We shot in a forest and composited it in the distance.” Guerrilla filmmaking allowed for more flexibility during principal photography. “They had golf cart rigs and dollies,” remarks Kolbe. “Nothing too crazy. We’d run out on the street and shoot. Then we had to do the stunt with the van flipping. We were always under the gun, so we couldn’t get too elaborate. We usually had two or three cameras at all times just to make things go faster.”

A mysterious character who goes by the name of Eleven (Millie Bobby Brown) has telepathic abilities, such as the ability to crush a soda can with her mind. “The can was all practical effects,” reveals Kolbe. “Caius Man, our special effects supervisor, did those. Wire removals were needed from stunts, like when the guards are blown through the door into the hallway.” Electricity and lights played a big part in the visuals and storytelling: “At the end of the day we would look at dailies and go, ‘That looks great.’ Or, ‘Can we add a little bit to it?’ Nine times out of 10 we enhanced the lights slightly. The Duffers wanted to have practical flickering lights to create this eerie feel, but there were limitations to what could be done with the creature suit, so we had to go CG on some of the other shots. That’s when we had to match the practical interactive flickering light on a shot-per-shot basis.” 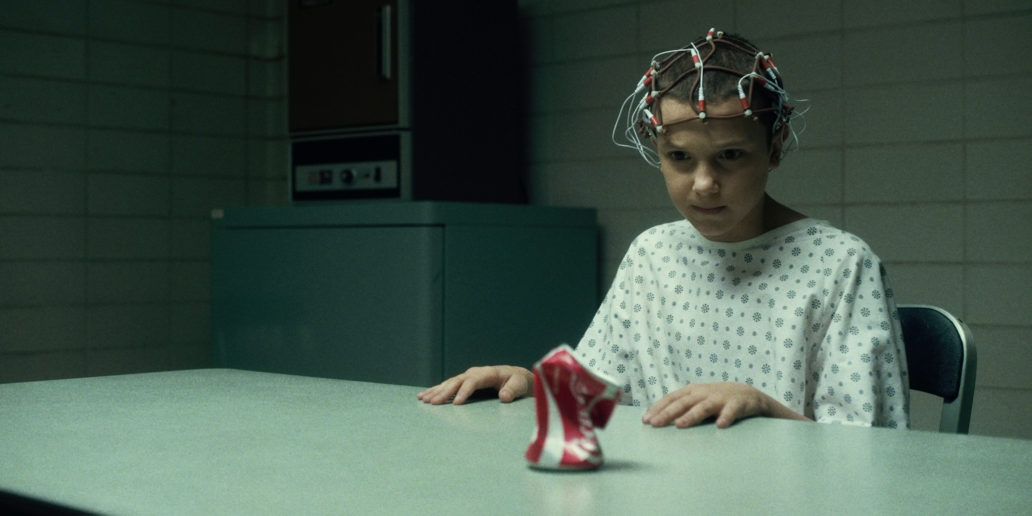 “There are obvious visual effects shots, but there are hundreds of shots that nobody would even know that we did, like our dead restaurant guy who has shot himself in the head,” remarks Kolbe. “All of the flies on him are CG.”

For Kolbe, a number of things stand out during the course of the first season. “Barb in the pool turned out cool. All of the creature work, like when it’s coming through the wall in the hallway and into the classroom. When they’re going through the Upside Down world into the library and find Will Byers [Noah Schnapp] and pull out the tentacle that’s down his throat. The flashback at the end that sets everything up for the next season when Will coughs up a slug in the bathroom.”

Speaking of the next season, principal photography has concluded for season two of Stranger Things, and a glimpse of it can already be seen in a teaser trailer. “I know that the brothers are definitely going to be doing a lot more digital work on these episodes and have multiple creatures. As far as everything else, that’s all I can tell you.”