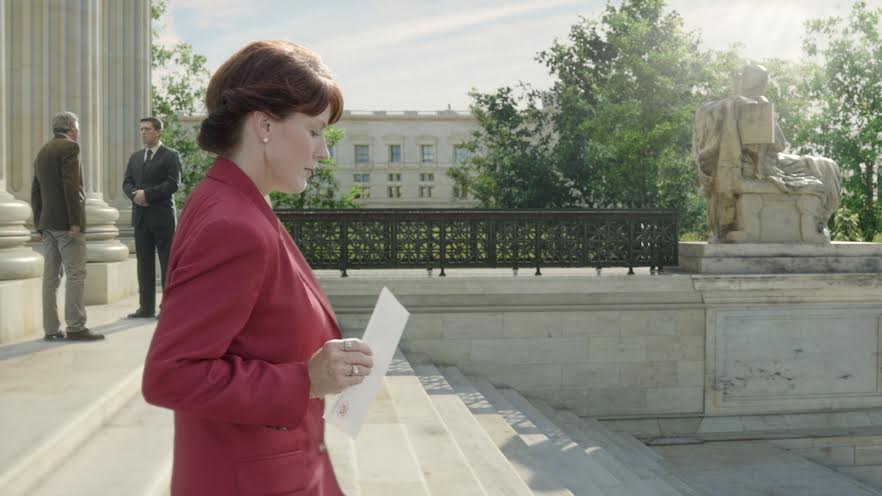 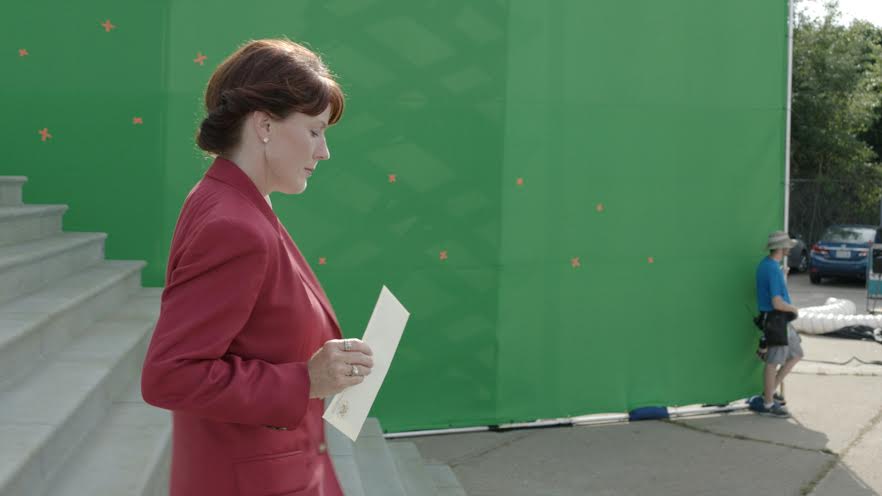 When it came to recreating Washington, D.C., for Confirmation, which explores the political and legal scandal surrounding the Supreme Court confirmation hearings of Clarence Thomas, filmmaker Rick Famuyiwa (Dope, The Wood) relied on the digital expertise of Shade VFX.

“Our task was to make the viewer think the film was shot in Washington, D.C.,” remarks Gabriel Vargas, who served as a CG supervisor on the HBO-produced project. “We created locations in Washington, D.C., such as the Russell Senate Office Building, the Supreme Court Building, and Capitol Hill. We integrated these digital assets into film shot in Atlanta, sometimes extending the practical sets and sometimes replacing them completely.”

Collaborating with Vargas was digital effects supervisor Harrimander Khalsa. “In addition to these CG assets, there was a combination of CG and matte painted environments, including CG trees and cars,” explains Khalsa. “There were many green screens out windows of hotel rooms and offices that needed to have the D.C. skyline. Depending on the shot, we did animated previs or still-frame mock-ups to sketch out what we were going to need. There was previs for the CG buildings with camera moves, and we did still mock-ups for matte painting environment shots. This way we knew what we would see in different directions while shooting and could plan out certain camera choreography ahead of time.”

Research consisted of taking photographs of Washington, D.C., along with searching the internet and reviewing archival news footage. “As a starting point,” Vargas says, “we actually went to the locations and did LiDAR scans and extensive high-resolution photography. We made sure to get photos for reference as well as close-ups of all the materials and details that could be used as textures.” Maya, V-Ray, Photoshop, Mari, and Nuke were essential tools. “Close high-resolution texture reference photos were used in Mari to texture and create and match the reference as close as possible. We then used HDRI lighting to recreate the lighting conditions of the day in V-Ray. We also used digital matte paintings and projections to expand our environments beyond the buildings we constructed. Then our compositors integrated the actors shot over green screen into our digital sets.” 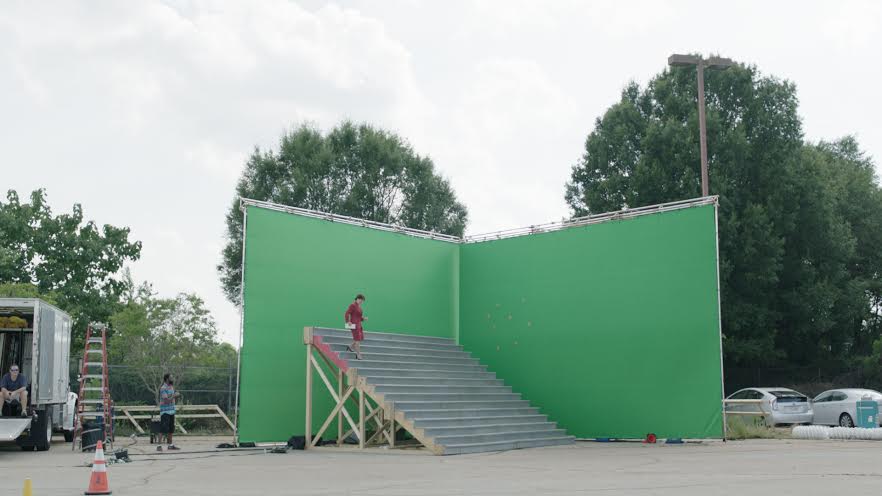 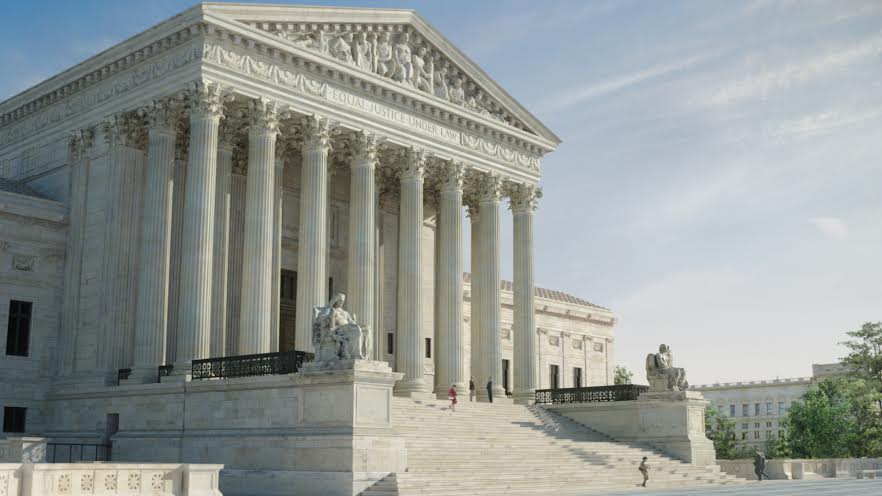 “In certain cases, like the Supreme Court or the Capitol Building exteriors, the majority of the frame would be created in post,” says Khalsa. “So there was collaboration with the director of photography, Rachel Morrison, to achieve the right framing and composition. Understanding what Rick wanted to accomplish, how he and Rachel wanted to compose it, and then having a clear picture of how our effect would play all allowed the shots to go off smoothly on set. We did previs on several shots to make sure that we got exactly what we needed and that everyone was happy. It takes a lot of teamwork when such significant portions of the image are going to be added in VFX.” The team at Shade VFX also had plenty of interaction with production designer Stephen Altman. “Specifically for the Caucus Room, to make sure we had the set schematics of what he was building so that our model would line up. In that case, they made the lower half of the room – enough to shoot the scenes – and then we had to add the upper half, continuing the walls and pillars up to the ceiling and adding our own chandeliers.”

“Chris Birdsong, the key grip, was also really great,” says Khalsa. “He and his team were on the ball making sure we were covered with all the green screens. In particular, I’m thinking of the Russell Building exterior, which was shot in Atlanta on a practical sidewalk and stairs. Because we were able to replace the entire surrounding environment with CG and matte painting, this required a great deal of green screen. There was discussion with the editor, Dirk Westervelt, on many of the shots that involved archival footage or stock footage. For example, we had to put Wendell Pierce into archival footage of Bush and Thomas meeting, replacing Thomas with Pierce, so we worked with Dirk on which clips would be used to get him the most effective material for his edit to show the actor as Clarence Thomas.” 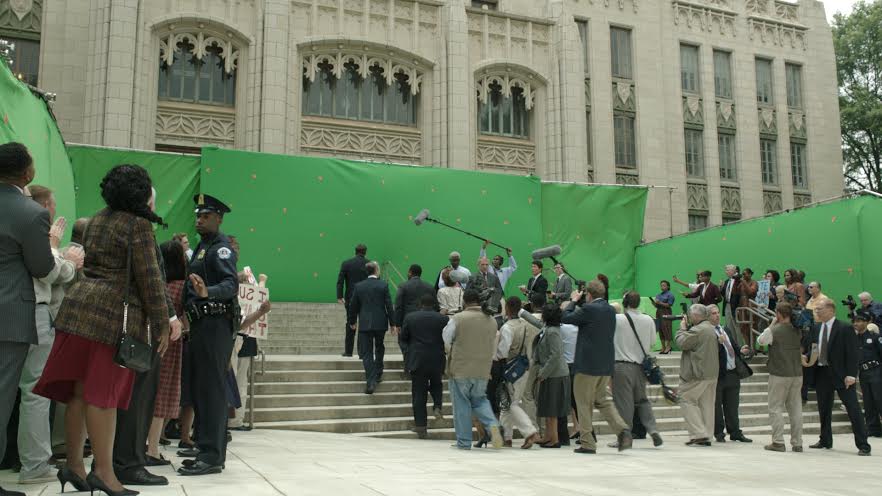 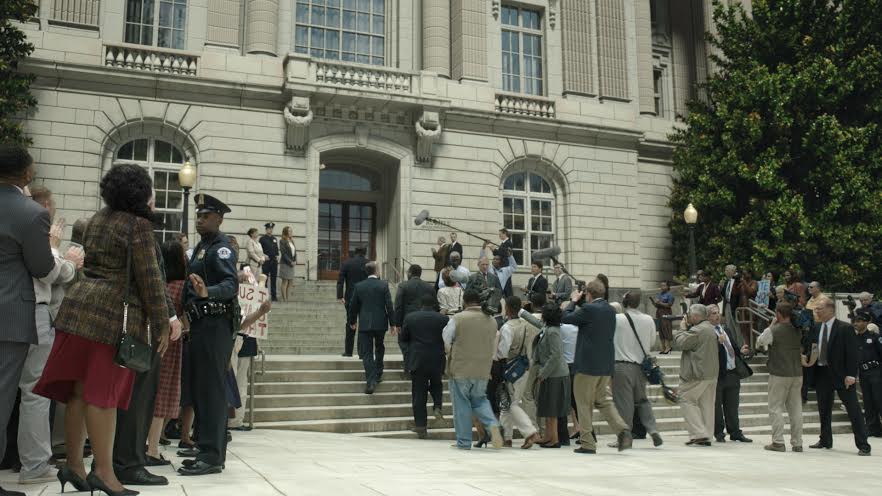 Along with the acting talents of Kerry Washington, Wendell Pierce, Greg Kinnear, Jeffrey Wright, Eric Stonestreet, and Jennifer Hudson, large groups of extras populate the scenes. “The crowds were actually real people shot on green screens,” says Khalsa, “but we had to do a lot of work getting them in the scenes, mapping them on cards in the right space and depth. The sky replacements were part of the matte painting shots.”

The visual effects work contributed by Shade VFX for Confirmation has become a major contender for a Primetime Emmy nomination. Bryan Godwin, senior supervisor and owner of Shade VFX, tells us, “One of the biggest challenges is being able to adapt to the changing needs of our client and being able to pivot to provide whatever services are needed. In the case of Confirmation, the original spec for the job was mostly some simple green screens and monitor burn-ins. However, due to some changes in the availability of locations, we quickly ramped up to provide HBO with fully CGI, photo-real shots of incredibly iconic and familiar architecture. Shade’s mastery of all manner of invisible visual effects allowed us to mobilize the team quickly and adapt to these new challenges with a great degree of success.”