Over the past 14 years, filmmaker Todd Haynes has entrusted Ed Lachman, ASC to lens Far from Heaven (2002), I’m Not There (2007), Mildred Pierce (2011), and Six by Sondheim (2013). The two frequent collaborators have reunited for Carol, an adaption of The Price of Salt, a 1952 novel by Patricia Highsmith that revolves around two emotionally isolated women who discover themselves through a relationship with each other. The period-piece romantic drama starring Cate Blanchett and Rooney Mara has earned Lachman Oscar, BAFTA, and ASC Award nominations, as well as a coveted Golden Frog at last year’s Camerimage International Film Festival.

“The brilliance of Todd Haynes is how he references his material to define the language of the film, visually and story-wise,” Ed Lachman notes. He referred to an extensive look book assembled by Haynes that included mid-century photojournalism by Ruth Orkin, Helen Levitt, Esther Bubley, and later Vivian Maier, a street photographer. The story takes place in an era defined by austerity and paranoia with the rise of Communism in Eastern Europe and McCarthyism in America, which helps to convey the emotional isolation of the characters. “Todd and I did look at some films from that time, like A Place in the Sun [1951] by George Stevens, but we also looked at other references outside of that period because we were dealing with a subjective mind: ‘How do we represent the psychological state of the characters?’”

The work of street photographer Saul Leiter inspired Lachman and Haynes to layer Carol’s imagery to give it more depth. “It gave a certain feeling of isolation and desire by playing with the textures of reflections and using framing devices like doorways and windows,” remarks Lachman. “We were trying to convey that the characters are trapped or hidden behind their own views by seeing them through car windows, diners, apartments, glass splattered with raindrops, street reflections, winter weather, and night condensation. It’s a view obscured and obstructed, even inhibited for us as viewers. The characters are hidden and seen at the same time.” 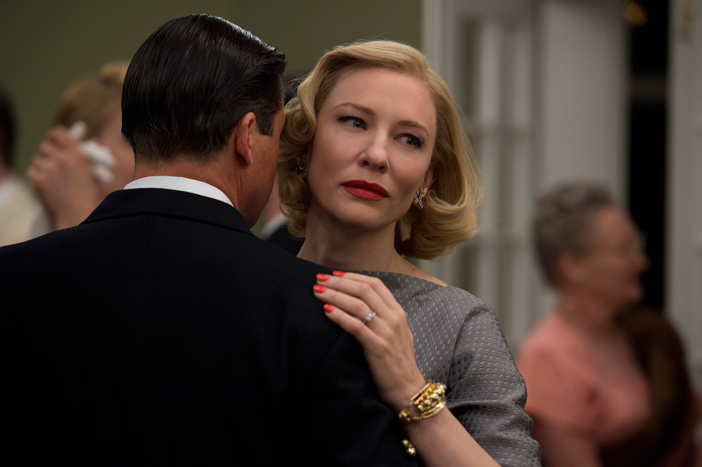 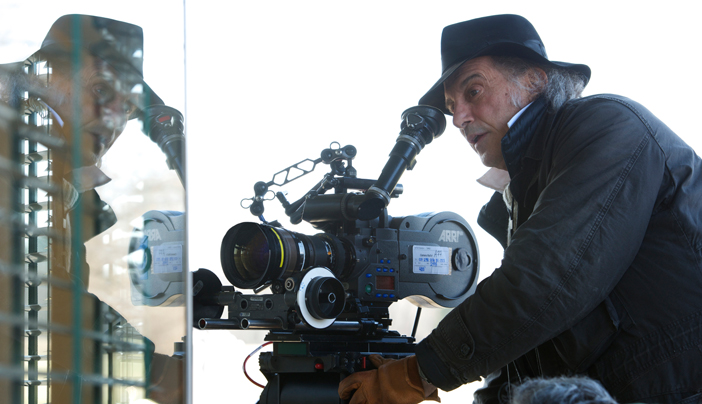 ARRI New York supplied the film’s camera equipment. “I used the ARRIFLEX 416, which is a great 16mm camera, with a set of Cooke S4 35mm lenses. I used the center of the glass, which meant better imagery for the Super 16mm,” explains Lachman. He also used a 16.5-110mm Zeiss Master Prime zoom and a T1.6 20-60mm Cooke zoom lens converted to 10-30mm. The winter setting of the story created the look for the interior lighting with cool and warm colors mixing together. “I didn’t want to violate the way the exteriors felt. The light had a muted and soiled quality to it. We were in real locations which had low ceilings in many cases, so I couldn’t rig lighting. I was using inexpensive paper China balls, and I dipped them in tea to get a warmer look. I also used light bulbs on rheostats to create a warmer color temperature.”

Lachman and Haynes opted for Super 16mm, as they felt the film grain created an internal movement that would affect the emotions under the surface of the movie. “Colors are rendered differently in film than they are digitally. On a digital chip, everything is pixel-fixated on one plane. In film, these three layers, RGB [Red Green Blue], have microscopic differences in depth, and that creates the feeling of it being like an etching,” Lachman explains. “We looked at early Ektachrome which didn’t have the full color spectrum that the color negative has today. I was trying to recreate the look of Ektachrome in slides of that period. I leaned more toward magentas, yellows, greens, and blues. The Ektachrome slides felt cooler to me, and that lent itself to the feeling of winter that we were depicting.” 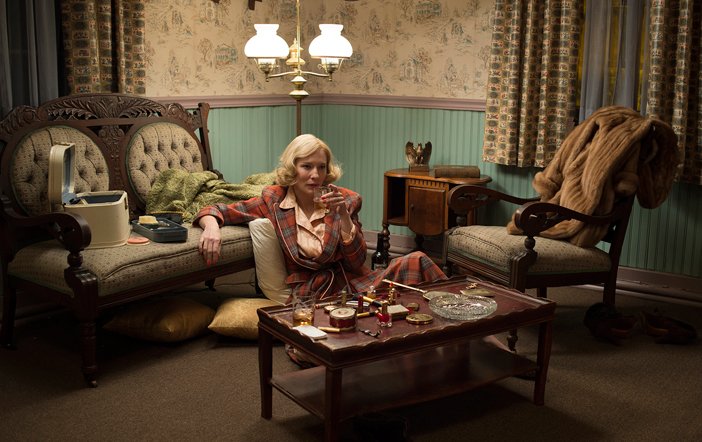 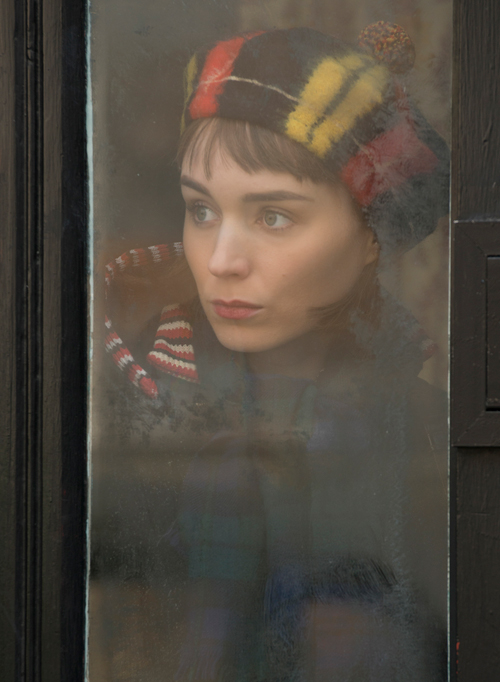 Principal photography lasted 34 days in Cincinnati, Ohio, which doubled as New York City during the early 1950s. “So much of the downtown of Cincinnati is caught in that time period,” observes Lachman. “We shot in the mansion of a Fortune 500 family who lived in the vicinity as the home of Harge Aird [Kyle Chandler]’s parents. We shot the court building as the post office. There was great original detail in the locations.” Shots were not generally preconceived. “Todd and I often don’t do storyboards, as we like to work off the environment unless there’s some orchestrated action scene. Generally, the way Todd works is: bring in the actors, do a rehearsal, and work out what we do with the camera. We work out the geography in the space, and Todd has it in his head how he wants the camera to see it. I implement with him on how to do that.”

Veteran collaborators supported Lachman during production. “I had a gaffer I have worked with for over 20 years, John DeBlau, who feels light the way I do. He’ll use whatever will work even if it is just a string of hidden light bulbs. John captures the world with a great sense of naturalism. I also worked with a grip named Jimmy McMillan who is a great problem-solver with rigging and how to move a camera in difficult locations. He also dolly grips and keys, which is a rarity,” Lachman says. “I had a wonderful operator who I have worked with, Craig Haagensen. I always feel that my immediate crew are artists in their own right.” Lachman mostly chose to deploy a single camera, but there were some exceptions. “In certain dialogue situations, such as when Therese Belivet [Rooney Mara] and Carol Aird [Cate Blanchett] go to the restaurant in the beginning, we used two cameras wherever we could because of time. The first camera is the primary point of view, and I try to implement the second camera around that.”

Legendary British filmmaker David Lean’s 1945 movie Brief Encounter  inspired the opening sequence of Carol. “Todd loved the framing device story-wise where a secondary character takes us to the main ones,” explains Lachman. “That shot in the beginning where Jack Taft [Trent Rowland] crosses the street, comes in to the Ritz Hotel, and discovers Carol and Therese, which we come back to at the end of the film, was a reference to Brief Encounter.” The majority of the film is told from a particular perspective. “Patricia Highsmith, who wrote the novel, told it from the point of view of Therese and her affection for Carol. Therese is falling in love and responding to the world around her and discovering who she is. Only later, at the end, does it change to where we’re seeing Therese through the eyes of Carol.”

A seamless transition occurs when Therese is crying on a train before the shot pans to her arriving back home. “It goes from her, to the reflection of the train window through the darkness of the night, to a taxi pulling up, where she gets out and goes up to her apartment building,” recalls Lachman. Shots are allowed to linger. “There’s a certain silence and observation in the film, and the approach to the filming has that built into it through the editing. That’s a respect Todd has for expressing the performances.” Digital enhancements were not a significant component of the filmmaking. “Only two percent of the film had any visual effects, and they occurred in street scenes where things were out of period.” Some of the colors were desaturated during the DI process. “I sent the film negative to the lab and gave them notes as to how I wanted it to look.”

Lachman, a native of Morristown, New Jersey, is intrigued by his Oscar nomination for Best Cinematography. “It is interesting this year for the Academy that we have the whole spectrum of visual filmmaking.” In regards to his work on Carol, which has garnered international awards and nominations, Lachman responds, “Possibly people are responding to the authenticity of the in-camera storytelling. They can believe in the images that they are looking at. We all know that filmmaking is the illusion of reality, but more and more we’re getting further away from believing what the images represent.” 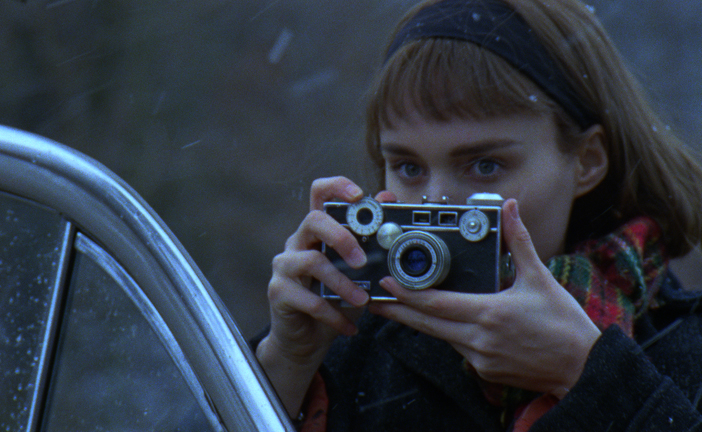 Images courtesy of The Weinstein Company