Once again, DP Rob McLachlan, ASC, CSC has shot a Game of Thrones episode that includes a controversial death scene. He also lensed Season 3’s infamous “Red Wedding” episode, “The Rains of Castamere.” McLachlan weighed in on the show’s knack for shocking character deaths: “There’s one in “The Dance of Dragons,” and in the following episode, we kill Jon Snow [Kit Harington]. We’re not making any fans!” McLachlan’s work on “The Dance of Dragons” scored him an Emmy nomination this year, along with three other GoT cinematographers.

“The Dance of Dragons” features an emotionally charged sequence in which a young princess, Shireen Baratheon (Kerry Ingram), is tragically burned alive as a sacrifice. “Dramatically it is extremely effective,” McLachlan explains. “My camera operators’ work was perfect. There’s not a bad-looking thing, and the light was good.” The crowd’s reaction shots were a critical aspect of the scene. “We found these marvelous faces in Belfast that you won’t find anywhere else. The feeling we were after was like the Germans retreating from Stalingrad – with the cold and misery. It didn’t hurt that we were shooting in December, and those extras were there usually two hours early to get dressed and ready to go.” 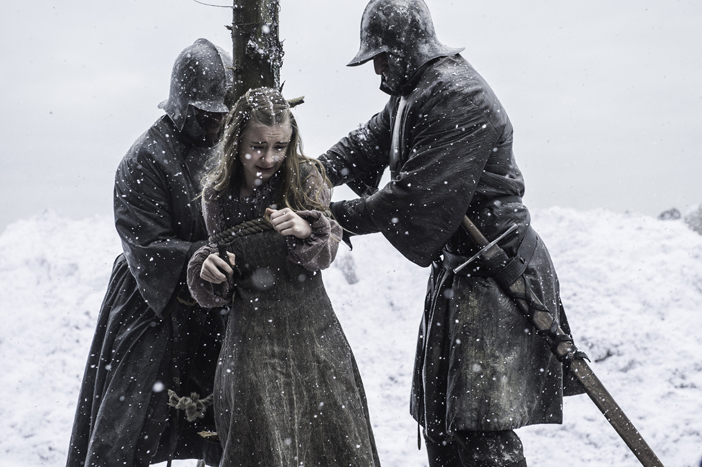 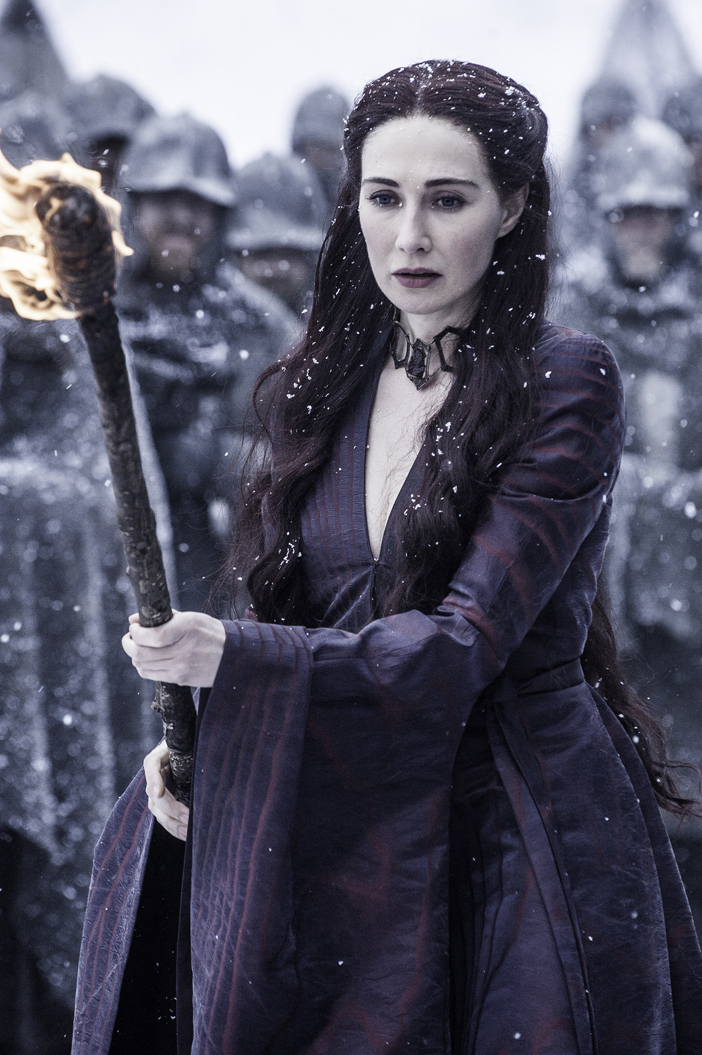 “It was fortunately overcast and miserable most of the time,” remarks McLachlan. “We did have huge military-type smoke machines ready to blot out the sun if it did come out and start to get to cheery. Luckily it was overcast. All of the snow you see at that setting was shot without any VFX enhancements. The effects guys covered all of the surrounding hills with fake snow, and we had huge wind machines on big cranes with hoses blowing the paper snow through. It turned out well, but it was a massive effort on the special effects department’s part,” McLachlan explains. “We were shooting in the quarry where we shot the ‘Hardhome’ sequence, and it’s where Castle Black is set. They had smoke machines on pickup trucks that could race around and try to get upwind as the wind changed throughout the day. You’re doing all of that while trying to get those shots exactly right.”

The episode also follows Arya Stark (Maisie Williams) as she travels to the region of Braavos. “Shooting on docks is always a pain and my previous Beachcombers experience paid off,” McLachlan says. “I talked the production into getting a large floating raft made out of plastic cubes that clip together and provide a platform to work off of. We could float that around the dock when Arya was down at the pier selling her oysters. The art department did a bang-up job of converting this touristy place with a bunch of brightly colored boats into a whole new wonderful world of canals.” 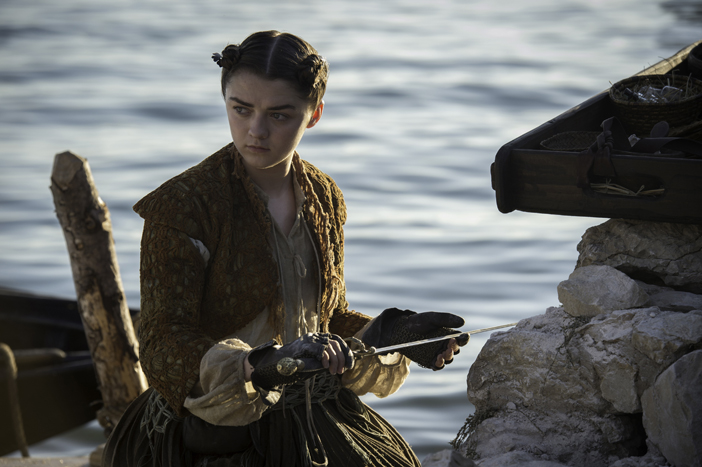 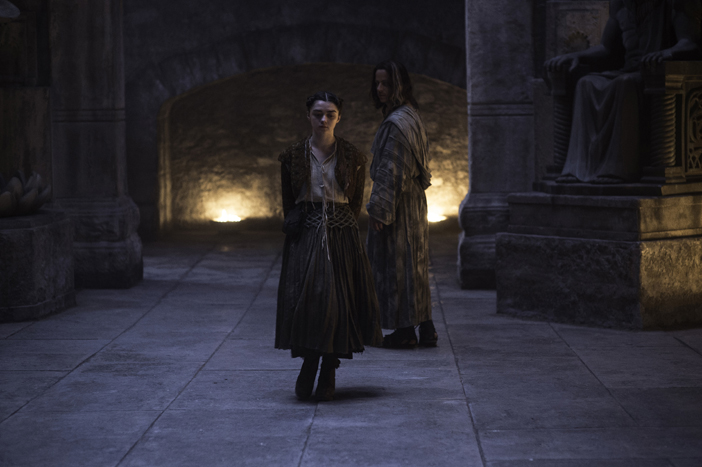 There was only one day allotted for shooting the Braavos scenes. “At certain parts of the day it looked way better in one direction than the other, so we tried to plan our day around that. The preparation schedule for the show isn’t front-end–loaded like it is on a feature. While other episodes are shooting, we can visit the location and observe the light, even though we scouted it months earlier. Usually, there are some minor modifications that will make our shooting plan even more efficient.”

Shadows have a prominent role in the Braavos sequences, especially while Arya waits for Mace Tyrell (Roger Ashton-Griffiths) and Meryn Trant (Ian Beattie) outside of the Iron Bank. “We were trying to give a sense of time passing,” explains McLachlan. “We filmed the plaza in the shade initially, and when they [Tyrell and Trant] come out hours later, they’re in bright sun. That was definitely intentional in terms of giving a subtle sense of time passage, and showing Arya’s patience as she waits for them.” Later that night, Meryn visits a brothel. “This was done during the day, because they won’t work a crew past 6 p.m. most nights. There is no night shooting, so you have to try to make it. In our case, we found a nice covered archway in the town of Kaštel Gomilica [Croatia], a little covered colonnade that we were able to tent in on one end. I let a little of what was left of the daylight come down through the top to make it feel like it was dusk. The scenes inside of the brothel were shot in the studio back in Belfast, months later.” The scene requiring the most amount of work to execute took place in the Great Pit of Daznak in Meereen. The episode’s director, David Nutter, also directed the “Iwo Jima” episode of The Pacific for HBO. “He said that the Daznak Fighting Pit dragon sequence surpassed that quite significantly,” McLachlan says. “David, the AD [Toby Ford], and I spent a massive amount of time reworking our shooting plan. We only had 10 days to do it, nine and half hours of useable light, and a massive amount of setups to get in order to tell the story clearly. We ended up with what we called our ‘Daznak Playbook’ and it was a thick document that had a shooting plan for every single day. We shot it in Osuna, Spain, which is a small farming town about an hour out of Seville. They brought in about 400 Spanish extras, who were extraordinary. We had to make the most of the natural light in order to work quickly and have it look good. We made sure that the art department made each of the entrances and the stands of the bullfighting ring look the same, so we could clock the action so it was almost always backlit. We lost the sun a few times and had to make our own, but luckily the shots are short enough that most people will not notice the inconsistency.”

“Often as soon as you get more than one camera, the other ones are compromised in terms of the visual quality of the composition or lighting,” explains McLachlan. “But in there we planned it for all four cameras so we could get as much great shooting material as possible.” A couple of iPhone apps came in handy for mapping out the sunlight. “Day one, our green screen blew down, which ended up being a godsend because it gave us more daylight on the infield.” The previs of Drogon the dragon’s dramatic entrance sequence was very useful for shooting. “A flamethrower was placed on a Technocrane, which had a telescoping head so it could pivot, swing or turn. We used the practical fire to provide the flames from the dragon.  Another repeatable head robotic crane filmed the flamethrower.” Later in the sequence, Daenerys (Emilia Clarke) is under siege. She climbs on top of Drogon and is flown to safety. “They made a green screen fiberglass dragon’s back,” reveals McLachlan. “Even though I knew I would be able to duplicate the lighting elsewhere, the VFX team really wanted us to shoot it in the bullfighting ring, so the color of the light bouncing off of the sand would match. We finished a half day early, so we had time to do shots of her climbing onto the rig against the green screen, and got most of the elements we needed of her flying away. I did about four other shots this January in Culver City in a parking lot, because they wanted some extra beats of her getting onto Drogon. I had all of my notes so I was able to match that perfectly with what we had done four months earlier in Spain.”

“The show uses the same camera package on both units,” McLachlan tells us. “They each carry two ARRI ALEXAs and usually a spare body. In this case, I had four on the floor. Usually, we try to have one that is a full aperture 16:9, which we use for the bigger plates that visual effects needs to pan a little north, south, east or west. For the action sequences, we used the Angénieux 24-290mm. For most of the episodes, I shoot almost exclusively on Cooke S4 Prime lenses. All of the gear comes from ARRI London. I’ve never seen so many lights. In the studios in Belfast we have ninety 20Ks lighting the various sets. On a typical TV show, if you’ve got two 20Ks, that is considered excessive. We also have five 20K Mole-Beam Daylight projectors, which produce a hard shaft of light, and a vast array of 18K and smaller HMI ARRIMAXs.” “The biggest challenge was thinking the Daznak Fighting Pit dragon sequence through so thoroughly, and shooting those days in our heads in advance,” explains McLachlan. “If we hadn’t done that, we would have had to cut a lot of corners and ended up with a lot fewer shots, and a much less spectacular and effective sequence. It takes a lot. When you’re already tired and it feels like, ‘I don’t need to shoot today. I can take a bit of a breather.’ Physically it’s easier, but mentally we found ourselves challenged every day, forcing ourselves to think through that sequence so we could do it in the days that we had. When we tell people that we did that in 10 days, they don’t believe us.”

Game of Thrones Season 5: Inside the Episode #9