A twist of fate enabled DP Martin Ahlgren to join the creative team behind one of his favorite shows: Netflix’s House of Cards. “I was shooting a Starz show called Power in New York, and one of the directors I worked with, John David Coles, had directed three episodes of House of Cards Season 2, and was going to return as an executive producer,” Ahlgren tells us. “I told him that I would be interested, and he put my name in the mix for consideration.” The Swedish cinematographer was brought on board to shoot eleven of Season 3’s thirteen episodes. The season follows the Underwoods, the manipulative husband and wife political team played by Kevin Spacey and Robin Wright, as they occupy the White House.

“You’re shooting six pages of script each day, so you have a slightly higher shooting pace than most features. But you go about it in much of the same way, in terms of how you block a scene and devise the way you are going to tell the story,” Ahlgren explains. “What’s nice about television is that there are a lot of things already in place. Your crew is there and your equipment package is set. The different members of the creative team come together like a jam session, and find a creative way of attacking what you have to do that day.”

“Now that the Underwoods are in the White House, it felt like there was room to open up the visuals,” says Ahlgren. “We probably ended up moving the camera more than had been done in previous seasons, but we continued to capture the style of the show. The camera only moves when it is motivated by the actors, if it’s an emotional point.” Kevin Spacey’s signature Shakespearean asides to the camera stem from the original British drama series. “In the first two seasons the standard way of shooting the addresses was to place a camera a little bit lower, off to the side. In Season 3 we started finding other ways for him to address the camera. Occasionally, he would do it in a wider shot. All of a sudden he’ll look straight into the camera and speak, or he would be looking at a window and his reflection in the glass would turn toward the camera and speak to it.” 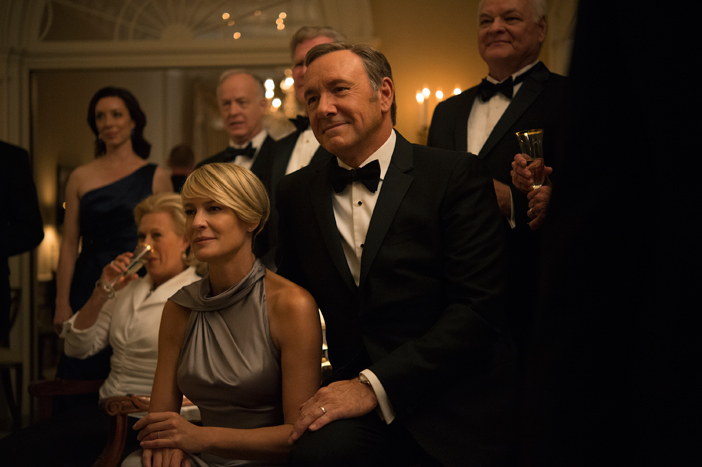 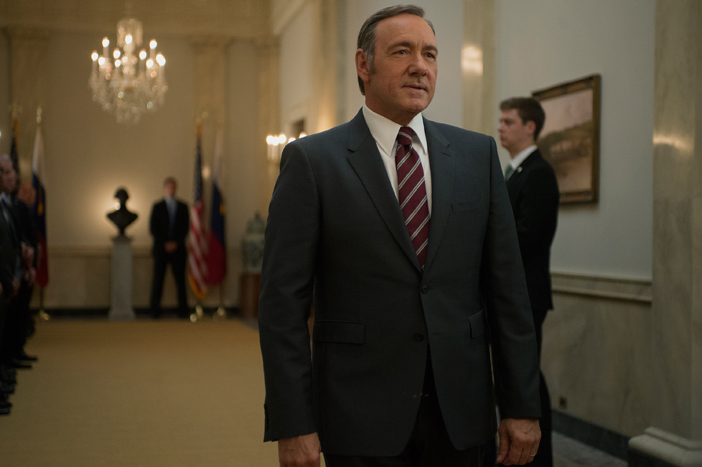 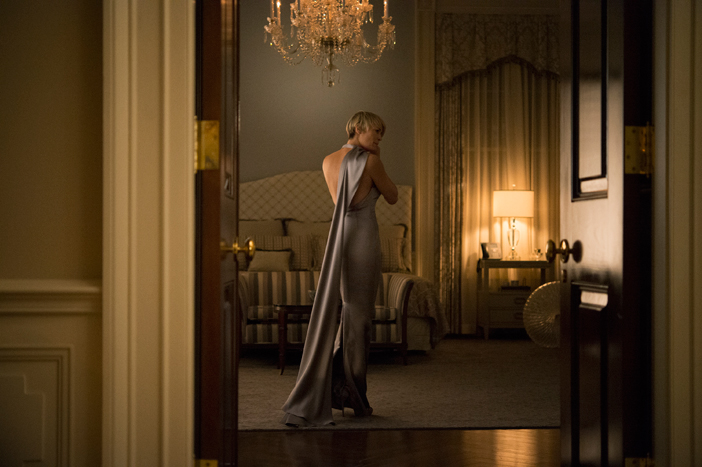 “All of the driving sequences are shot ‘rich-man’s process’,” reveals Ahlgren. “We have a crew go out and shoot the plates of the environment that the car will be driving in. The car is shot on green screen, and LED screens play back the footage just out of frame. It provides the light from the environment that the car will ultimately be composited into, and gives a real feeling through the change of color and contrast. Occasionally, we add some classic ‘poor-man process’ tricks like sweeping headlights through the car, or stoplights shining through the front window. In post, they insert the footage that we used for lighting, so there is a direct correlation with the footage outside and the light coming into the car.”

Ahlgren received an Emmy nomination for a sequence featuring a state visit by the Russian president Viktor Petrov (Lars Mikkelsen). “The third episode of Season 3, ‘Chapter 29,’ was a bit of a favorite as a whole. The state dinner was something I was particularly proud of because we shot it using almost exclusively candles. The episode is also fun because Pussy Riot makes a cameo appearance. The party continues in the First Couple’s residence upstairs in the White House. The afterparty was originally scripted to take place at the same location as the state dinner, but someone mentioned that John F. Kennedy invited groups of people to his residence for drinks after dinners with foreign dignitaries. We thought that was perfect, and gave a different spin to the party.” 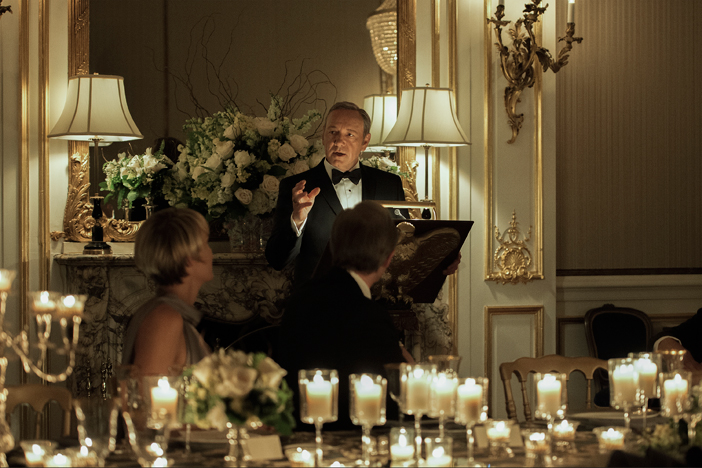 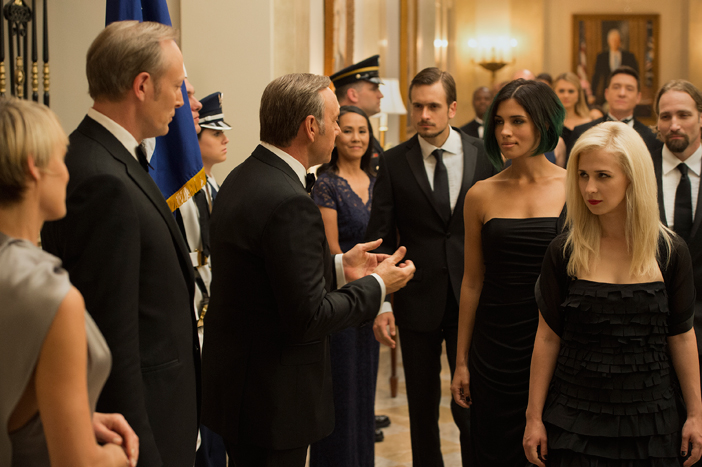 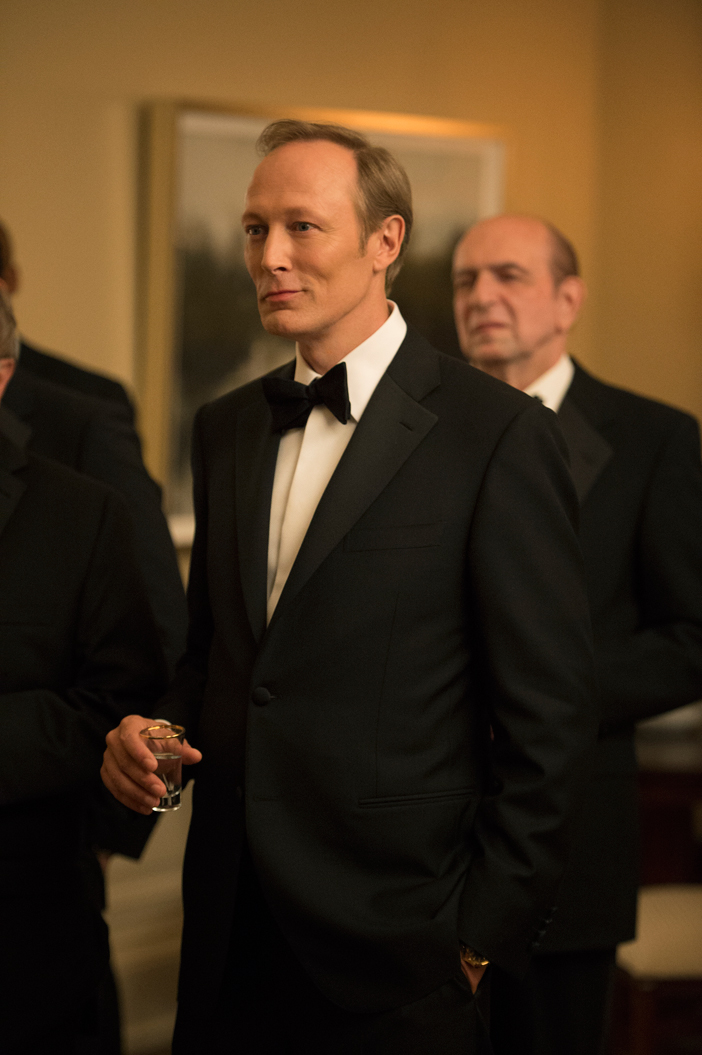 A major topic of discussion between Ahlgren and director Tucker Gates was how to light the state dinner. “Tucker asked me if I could devise a lighting scenario that would allow us to move fast without too much relighting. I suggested going the Barry Lyndon [1975] route and lighting it all with candles on the table. Tucker was game, so we did some tests with the art department to make sure we would have enough light,” Ahlgren tells us. “There are some electrical lights around the perimeter of the room, but all of the lighting on the actors was entirely provided by the candlelight. We had about the same light level as when Stanley Kubrick famously used a 0.7 NASA lens in order to photograph people by candlelight [in Barry Lyndon].”

“The camera has been a RED camera for all three seasons of House of Cards,” explains Ahlgren. “It was upgraded to a DRAGON for this season. It had been an EPIC before, and the lenses were Zeiss Master Primes. I used a method of hanging skirts of ultra bounce material around the set to create a soft but directional light in the room that would be above the actors. We could move quite freely, but at the same time provide a sculpted and soft light. We shot 6K RAW but framed for 5K to have room to stabilize the image later in post.” Ahlgren adds, “Colorist Laura Jans refines the contrast and works on fine-tuning the look of the show. Then there are a few things that are left over from [executive producer and Season 1 director]David Fincher – he hates having red in the frame. We try to avoid any type of redness in the actors’ skin, and if there’s any red light source in frame or art direction, it is limited.” A happy accident occurred during principal photography. “We had this narrow vertical stairwell set where Frank Underwood [Kevin Spacey] takes the Russian president [Lars Mikkelsen] to smoke cigars and talk business,” explains Ahlgren. “We had planned how we wanted to light the scene, but then we arrived, [and]we saw that the art department had installed two bare light bulbs. We ended up shooting all three scenes in the stairwell lit only by those two bulbs. We liked it because they gave the scene a film noir quality, which is unusual for the show, but felt suitable thematically for the discussion between these two powerful men. We liked the way the bare bulbs would create shadows from the spiral staircase that the actors could use to find their light or to find shadows to hide in.”

“The arrival of the Russian president was originally supposed to take place in the White House, which is a standing set, but we felt that it didn’t quite have the scope that the presidential visit warranted,” explains Ahlgren. “We reshot a part of that scene outside the headquarters of the Daughters of the American Revolution in D.C. because the exterior of that building is similar to the entrance where dignitaries would arrive at the White House.” Ahlgren liked all of the scenes in ‘Chapter 29,’ especially those between the two presidents. “I thought the dynamics between Kevin Spacey and Lars Mikkelsen was interesting, strong, and made that episode a particularly fun one to shoot.”