With the premiere of Agent Carter on ABC, the near-daily reveals about Avengers: Age of Ultron, and the latest trailer for Ant-Man, the saturation of Marvel excitement is at a ridiculously high level. Case in point, Sony and Marvel just announced they’ll bring Marvel into the amazing world of Spider-Man, and as a comic book fan, all I can say is, holy fu… But what seems to be getting lost in the shuffle is a deal Marvel made with Netflix that brings five new series to Netflix streaming: superheroes Daredevil, Jessica Jones, Iron Fist, and Luke Cage are all getting their own thirteen-episode series, which will be followed by an eight-episode miniseries where they team up as the Defenders. And by the looks of the dropped trailer for Daredevil, the Netflix venture could be just as entertaining as Marvel’s films.

Daredevil was co-created in 1964 by Stan Lee and Bill Everett. Lee was looking to continue Marvel’s successful template of creating flawed, true-to-life heroes, and came up with the concept of a hero who was blind, but whose other senses were heightened to the point where he could “see” using a kind of radar sense. By day, Matt Murdock (Charlie Cox) is a lawyer fighting for justice in New York City’s Hell’s Kitchen, and by night he continues that fight on the streets as Daredevil, the Man Without Fear.

One might remember the character Daredevil from the ill-received 2003 film starring Ben Affleck in the title role. The film did bring in $178 million worldwide, $100 million over its production budget, and even spawned an Elektra spinoff, but critics felt Daredevil was unimpressive compared to other comic book films. Specifically X-Men 2, which was released later that year and made $400 million worldwide. The same fanboys and girls who are now complaining loudly about Affleck playing Batman were no kinder, or quieter, a decade ago when he put on the red suit. Maybe that’s why the Netflix series is generating so little buzz. 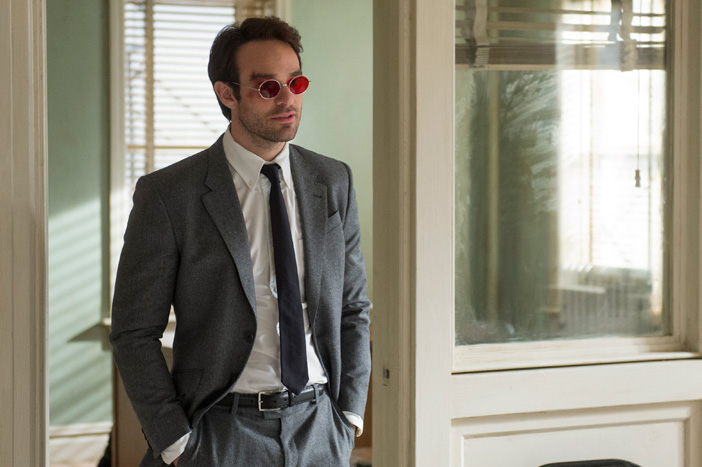 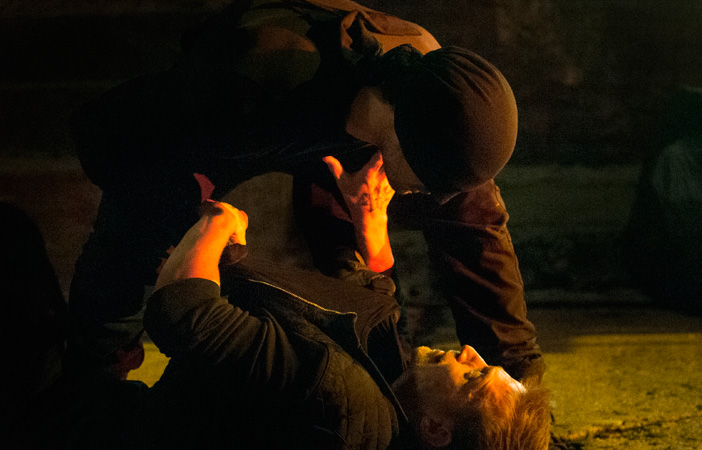 But the truth is the series appears to avoid some of the more outlandish, cheesy aspects of its 2003 film counterpart, offering a gritty crime drama with a much darker tone, thanks in part to cinematographer Matthew Lloyd. Officially titled Marvel’s Daredevil, the DP took to the Red Epic Dragon to create the show’s visuals while production sound mixer Joshua Anderson recorded the set dialogue with help from booms operator Gregg Harris and Terence McCormack Maitland.

The real question is how much the visual effects will come into play. The team over at Shade VFX will be handling the effects, and if we learned anything from Marvel’s films, they like doing as much as they can in camera before breaking out the green screen. But if we had to guess, VFX will probably play a major role in creating the city around Daredevil, Hell’s Kitchen. And if showrunner Steven S. DeKnight wanted to do things right, he should consider making the city a character of its own, similar to what Fox has done with Gotham.

Technicolor will be handling the series post sound work with supervising sound editor Lauren Stephens at the helm. Ten episodes of the show’s rerecording were completed by Marc Fishman with Scott Milan, Adam Jenkins, and Terry Porter pitching in on the final three. Other cast members include Deborah Ann Woll (True Blood) as love interest Karen Page, Elden Henson (The Hunger Games: Mockingjay Part 1) as law partner Foggy Nelson, and Vincent D’Onofrio (The Judge) as the Kingpin of Crime, Wilson Fisk.

Netflix will release all thirteen episodes on April 10, 2015. We’ll definitely be watching – will you?