There are endless options a digital audio workstation (DAW) like Pro Tools can offer. Multiply that by the thousands of third-party plug-ins, standalone software, and outboard gear you can implement, and your DAW can become quite extensive. But the truth is, many audio engineers, myself included, will have a short list of tools they’ll use to process audio in their daily workflow. This is partly due to a lack of time to play with new plug-ins, but mostly because we generally work on the same type of projects and what we already own works.

For myself, I’m a re-recording mixer in reality television, and I know I’ll need a good EQ, limiter, compressor, and noise reducer. I’ll use those plug-ins about 90 percent of the time – throw in reverb and pitch shift, and that’s all I need on a given session. So despite how cool the latest plug-in can manipulate a sound or how smooth it can process a clip, in truth, for my daily applications, I just don’t need it.

Except… for that one time.

We’ve all run into it – that one project that needs a little extra, something outside of your usual bag of tricks. Maybe you need to fake a radio broadcast or match studio ADR to production audio. Or like me, during a voice session for a trailer, the client asks, “What if we made the voice-over sound like a monster?” Suddenly, you’re scrambling, hoping to find one plug-in that does everything you need, but you know deep down you’re going to have to use multiple plug-ins to get what the client wants, and you think to yourself, “Why has no one never made a monster voice plug-in yet?”

Recognizing the need for layers of processing in order to create something otherworldly, the folks over at Krotos developed Dehumaniser, a standalone processor that allows users to create monster/creature/alien sounds in both real time and with a prerecorded clip by combining multiple sound manipulation processes at once.

Dehumaniser comes in two versions, Lite and Pro. While both versions come with thirty-five preset creature settings, the Pro version offers advanced options so you can edit and adjust every parameter, freeing the sound from its confined preset. For this article, we’re reviewing the Pro version, build 1.1. 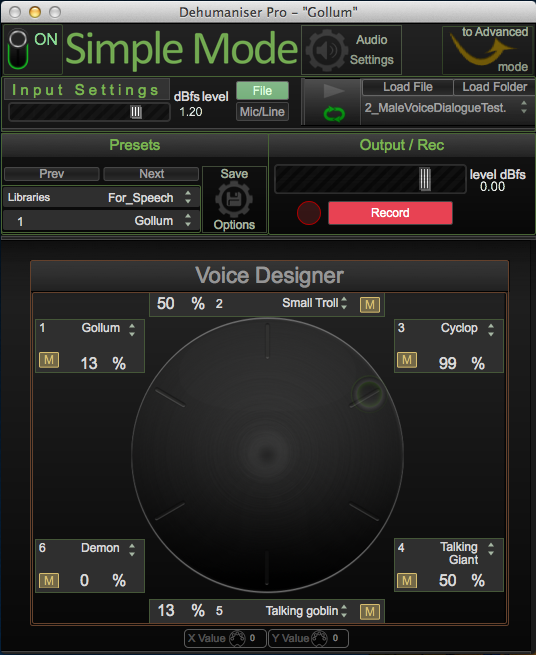 Simple Mode
You can switch between two modes in the Pro version: simple and advanced. To do so, just click the button located in the top right corner. As you might imagine, the interface in simple mode is easy to use – it’s intended for working quickly. There are four basic sections: input, output, presets, and Voice Designer. Under presets, you can select any of the thirty-five sounds available. Choose between the low-end rumbles Rock Monster and King Kong, to more phase-shifting warbled sounds like Insect Alien and Funny Robot, or presets that alter a voice with clarity, like Gollum or Demon.

Voice Designer
There’s also a feature called Voice Designer (available in Lite, too). It’s a virtual mixing pad where you can load up to six presets and choose the exact weight of each effect. This enables the user to mix them further, creating a completely new sound. The tool works off percentages and a controllable center wheel appears within the interface. By dragging it toward any of the enabled presets, it will create a new effect on the voice.

So let’s say you have Gollum and Talking Giant enabled in Voice Designer, and you want to add more Gollum. Just drag the center wheel toward Gollum to the newly desired percentage, e.g., from 50/50 to say 63/37. This simple yet very effective feature offers the user great flexibility in creating his or her own signature sounds. However, if you’re a flexibility junkie, switch over to advanced mode, and you’ll find that every possible parameter is available for adjustment. Advanced Mode
Each one of the thirty-five Dehumaniser presets is made up of various combinations of ten different audio manipulation tools. So for instance, in our “T-Rex” preset, Dehumaniser uses six of the ten processes to create this effect, with the other four muted. Each of these six processes has its own parameters to create the T-Rex voice, but users can manipulate all ten if they desire to do so – quite powerful.

Once you’ve loaded a file and chosen a preset, you can adjust all ten processes, and when I say ten, I really mean twelve because you can also add two of your own VST or AU plug-ins anywhere in the chain. And yes, if you’re wondering, the routing for all twelve of these processes is completely customizable.

By adjusting each parameter, you can add or limit the amount of input each process adds to the overall voice. But you can also go in to each process individually and customize the makeup of the audio manipulation. To do so, simply click on any one of the process channels, like “Scrubbing Convolution” to open up a window to customize every aspect of this process, including an EQ graph, delay, sensitivity modes, and even what kind of file is being sampled in either of the two voices. For example, I changed the ‘pig squeal’ to ‘cow’ to give my voice creation a more grating sound.

Keep in mind you have this level of control for all ten processes that come with the Dehumaniser. Every setting on every layer of this program is adjustable. With this type of customization, there’s literally no voice or vocal effect you hear in your head that you won’t be able to create with this program. Processing Power
Not only is the level of customization incredible, but the different layers of processing are extremely impressive. The Dehumaniser doesn’t just combine a basic EQ, pitch shift, and sampler together and call it a program. Instead, you get processes like animal convolution, which creates mammal sounds that you can convolve with your sample. Poly pitch shifting creates multiples of the input sound that can be pitch shifted further. Granular transforms the texture of the voice through pitch shifting different amounts of the original sound. There are options for delay pitch shift, pitch shifting, noise generator, cross-synthesis, sample player, and spectral shifting. Each one by itself would make for a remarkable plug-in – with Dehumaniser, you get all ten in one program.

But here’s the real strength of this program: it allows you to keep the essence of the performance you’re trying to affect. Instead of layering a vocal recording with various animal sound effects from a library to create, say, a minotaur, Dehumaniser actually creates those animal sound effects by sampling the vocal performance and affecting those samples. So now you don’t have to worry about cutting together the library’s lion roars to match the intensity spikes of the voice. Dehumaniser is doing the matching along the way because it’s using the voice itself.

Conclusion
Dehumaniser can be used for much more than just creating monster voices. We were able to take some whooshes and use Dehumaniser to morph them into brand-new sounding effects and drones, freshening up some of our more heavily used library effects. The program can also be used for music recordings, adding a darker, horror element to guitar riffs, or an ethereal sound to percussion. Krotos founder Orfeas Boteas says Dehumaniser is stable enough to use for live performances as well as theater productions or music performances.

However, all of these layers of processing have a cost, and the Dehumaniser can be a bit of a drain on the CPU. Given how many processes are going on inside the program, this isn’t really surprising. That said, our workhorse machine was able to use it without problems. Just note that a lower-end machine may have some difficulties or artifacting when using the program.

Another downside is that so far, Dehumaniser is unable to batch process clips. Boteas says Krotos is working on a way to do this that should be out early this year, but as it stands, you have to process clips one at a time, a time-consuming exercise if you intend to use Dehumaniser to affect a main character in a video game, cartoon, or film project.

And that brings us to the biggest drawback of Dehumaniser. It is a standalone program. However, there is a way to use Dehumaniser in Pro Tools or another DAW through a third party-program and creating an aggregate device in your audio setup. But the truth is, for the program to be really successful, it needs to be integrated into the workflow in a much simpler fashion. Part of the draw of this program is the ability to create monster sounds in real time. Hopefully Krotos is working on a plug-in version to fully integrate into a DAW.

Dehumaniser is a tool you should strongly consider adding to your audio toolbox. Even if you only have a need for it a few times a year, it’s priced very reasonably ~$75 for Lite, ~$300 for Pro. If Krotos adds batch processing soon, we could see this program as a must-have for any studio or post house. Whether you’re going for monster voices, ghostly whooshes, or gritty guitar riffs, Dehumaniser allows you to enhance and create sound with a level of customization that will please the most exacting of sound designers.