Our offices are located in Los Angeles, which is convenient because many of our industry’s manufacturers are out here, and from time to time someone will stop by to say hello or show us a new product. Recently we had yet another visitor – Matt Jensen from Alliance Audio Visual Group. The company reps a bunch of different brands, one of which is Audio-Technica. We’ve known Matt for a long time now, which makes it a heck of a lot easier to tell him if one of the products he shows us is absolutely terrible. Thankfully, this wasn’t the case when he asked us to review the System 10 Wireless series.

Audio-Technica offers several model types with its System 10 series to accommodate a variety of audio applications – stompbox, stack-mount, camera-mount. In this particular instance, we looked at the System 10 Camera-Mount Digital Wireless System with lavalier mic. Yeah, it’s a bit of a mouthful. The specific model number we tested was the ATW-1701/L, which has a price tag upwards of $449.95.

This particular kit comes with what you might expect from its name – a transmitter, a receiver, and a lavalier. The wireless operates at digital 24-bit/48kHz on the 2.4Ghz band with great success, and it’s clutter free from TV and DTV interference, providing three levels of diversity assurance – time, space, and of course frequency. The frequency isn’t selectable by the user, but is chosen by the wireless system itself for the cleanest results possible. According to the Audio-Technica website, the time diversity sends the signal in multiple time slots to maximize immunity to multipath interference. The space diversity uses two antennas on each transmitter to maximize signal integrity. And lastly, the frequency diversity sends the signal on two dynamically allocated frequencies for interference-free communication.

So what does all of that mean? It means, Audio-Technica is trying really freaking hard to make sure your signal doesn’t drop. The A-T site also claims the System 10 offers 100′ (30m) of operating range. It does that and then some. We used a measuring wheel, because who likes counting paces, and with a clear line of sight, we had no drops in audio for 246′ (75m). We decided to push the system to 328′ (100m), where we were still receiving audio, but it was a bit choppy.

Let’s break down each kit piece.

ATW-T1001 UniPak Transmitter
The housing is made from durable plastic. We didn’t perform our 6′ drop test to concrete, as we were a little afraid something might break, but we did accidentally drop it from 4′ and all was well. The transmitter operates on two AA batteries with an RF output power of 10mW. It’s extremely lightweight and features a belt clip on the back and mute switch on top – also the power button. Inside the battery compartment there’s a low to high level meter, which can be dialed in using the provided tool. Depending on your setup, you’ll probably have to adjust this to find the optimum output level (more on that later). The input connector for the transmitter is a four-pin locking Lemo, so if you have lavaliers with this connection type, you could consider the transmitter and receiver kit only (ATW-1701).

To power up, press and hold the top button; the system will automatically pair with the receiver, illuminating a green LED. A blue channel number (1-8) will appear on the front before fading to conserve power. The user can activate the mute switch by tapping the power button. The LED indicator will then go from green to red. Note: The mute switch can be easily activated, so you might want to consider putting a piece of tape over it or make sure it’s protected from being pressed on accident. If the transmitter is getting low on power, the LED indicator will blink, but what’s also nice is that on the back of the receiver, there are power indicator levels for both the transmitter and receiver.

ATW-R1700 Receiver
The receiver is also made from durable plastic and when powering up (press and hold), it illuminates a green LED. The unit has an internal rechargeable Li-ion battery, which according to A-T lasts about twelve hours. We performed an eight-hour test and all held up to our liking. To charge the battery, connect the provided USB to the right side of the unit and plug the AC adapter cable into the wall. It’s recommended to charge the unit for at least four hours before its first operation.

Also on the right side is a 3.5mm monitor output and volume knob for headphones. The receiver accepts either mono or stereo headphone signals. On top of the unit, next to the power button, are two threads to attach the provided antennas – position them in a 45-degree “V” for best reception. The left side has a 3.5mm output to connect the provided cable to your camera or recording device. The output can be switched from TRS balanced or unbalanced dual mono, and there’s also a selectable attenuator of 0db, -10db, and -20db.

Moving to the rear of the receiver, it has buttons for System ID and pairing. There are also illumination lights for pairing (will glow green when correctly paired) and peaking. The blue display shows the RF signal strength, ID number, and battery life of the transmitter and receiver – again, a great feature.

The back of the unit features a belt clip, and A-T provided a shoe mount that can easily slide onto the unit without removing the clip. The shoe mount has a 1/4″-20 internal thread on the bottom, giving you another option for mounting.

MT830cW Omnidirectional Condenser Lavalier Microphone
The lavalier is terminated with a four-pin locking Lemo and a 55″ (1.4m) cable. It also includes a clothing clip to use on talent or to keep a small bag of chips fresh. While the microphone is considered omnidirectional, the diaphragm picking up the audio is located on one side. This can work to your advantage on windy days if you place the mic toward the body (but be aware of clothing rustle).

For our tests, we played with all the various settings at different transmitter attenuator levels (high, low, medium, etc), different db levels on the receiver (0db, -10db, -20db) with a variety of input settings on our Blackmagic Pocket Cinema Camera. The idea was to simulate a one-man-band approach. If possible, it’s always best to have a dedicated camera operator and a dedicated person recording audio separately. Also bear in mind, while adjusting the transmitter’s attenuator you need to be gentle with the trimmer controls, as they’re made of plastic – don’t force them beyond their 190 degrees of rotation. 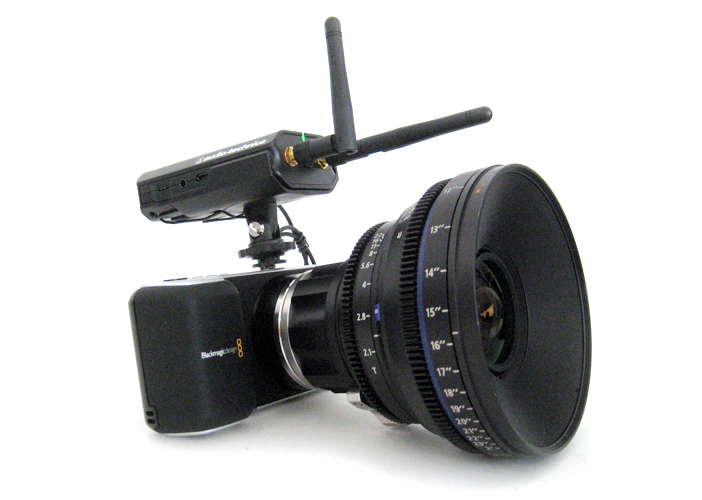 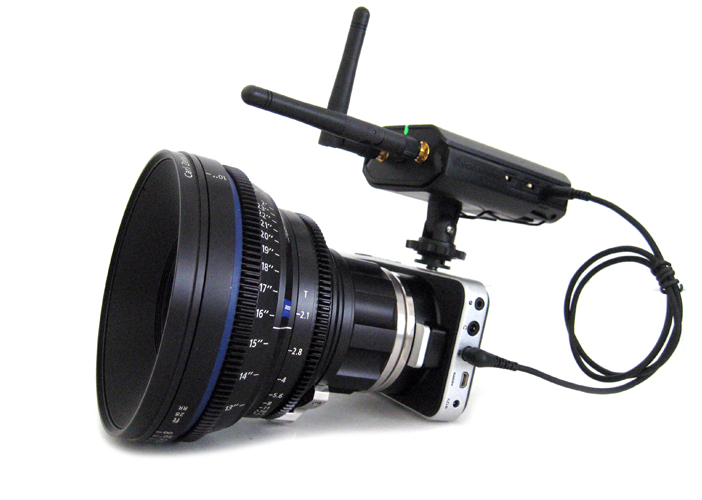 We recorded in a room next to a busy street to simulate a type of real world environment. All recordings are in their raw state. Nothing has been changed in post other than trimming them for time.

As you can hear, the kit alone performs exceptionally well. We had no interference issues indoors or outdoors when staying within the suggested 100′ (30m) radius. The audio from the MT830cW lavalier was clean and didn’t have that tin can sound we all tend to hate.

For fun we interfaced the wireless system with the Sound Devices MixPre-D. We fed the receiver into the MixPre-D using a 3.5mm to XLR cable. From the MixPre-D, we used its stereo unbalanced mic output and connected a TA3 to 3.5mm cable into the Blackmagic Pocket Cinema Camera. As one might imagine, using a high quality preamp did produce better results. We performed the same variety of tests as we did with the kit alone. You can listen to one below. 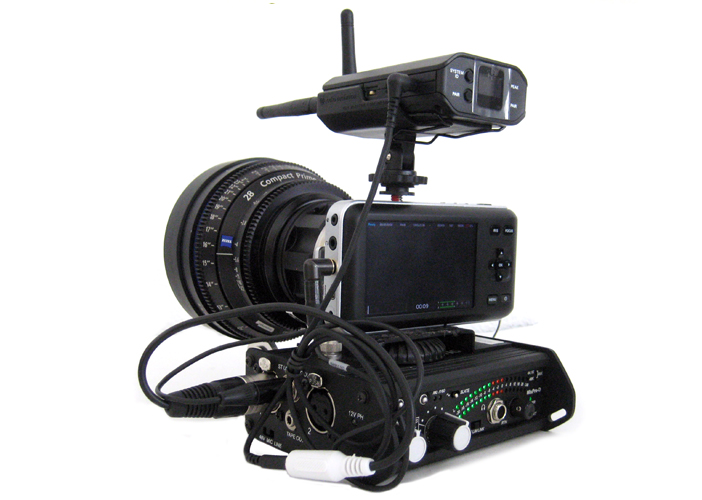 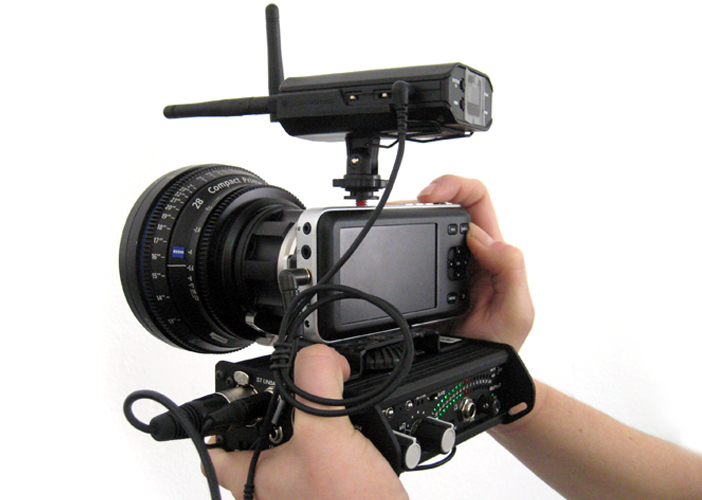 While pairing a low-noise preamp to any microphone will help in the signal-to-noise ratio game, using the System 10 Wireless ATW-1701/L kit alone produced surprisingly good results. Considering its price point, it’s perfect for reality shows, web series, documentaries, school plays, worship services, or as a camera hop for scratch track. Another feature worth noting – you can use up to eight different System 10 kits without any problems or selection issues – perfect for wiring multiple people on a shoot.