Big Hero 6 is a dazzling work of animation with an endearing story reminiscent of My Neighbor Totoro and The Iron Giant. But make no mistake – Disney Animation’s latest feature is truly special in its own right.

With directors Don Hall (Winnie the Pooh) and Chris Williams (Bolt) at the helm, Big Hero 6 adapts the story from a little-known comic in Marvel’s library. Hiro Hamada (Ryan Potter) is a fourteen-year-old whiz kid who has already graduated high school. While Hiro is idling away his time with underground bot battles, his older brother Tadashi (Daniel Henney) introduces him to his “nerdy” tech school, where he’s developing a plus-sized, inflatable healthcare companion robot named Baymax (Scott Adsit).

At the lab, Hiro meets Tadashi’s colorful group of geeky-cool science enthusiasts: daring Go Go (Jamie Chung), precise Wasabi (Damon Wayans Jr.), optimistic Honey Lemon (Genesis Rodriguez), and fun-loving Fred (T. J. Miller). The newly inspired Hiro admires his brother’s school and starts to work on an invention that could get him into the program. When Hiro’s creation gets into the wrong hands, the lively science gang agrees to help stop the man who stole it. With a few techie upgrades, they become Big Hero 6.

While robots usually come with a hard metallic exterior, Baymax is composed of an inflatable vinyl-like material that makes him look and sound adorable. His design perfectly captures his personality. Programmed to heal, he has a kind and nurturing manner that matches his huggable shape. Every time Baymax waddles around, it sounds like someone is making balloon animals, and when he loses his air, the spectacle is played for comic effect. Instead of electronic beeps and boops, Baymax has a soothing voice to match his gentle nature (imagine a less creepy version of HAL).

The visuals are exceptionally stunning and effective in transporting the audience into the film’s universe. Hiro’s hometown is the beautifully designed San Fransokyo, an East-meets-West city that creatively juxtaposes trollies and Queen Anne–style homes with Lucky Cats and Japanese-inspired curved roofs. It appears modern and urban, but feels like a dreamland at the same time. In one of the most exhilarating flying scenes since Falcor whisked Atreyu through Fantasia, San Fransokyo’s brilliance is shown off to full effect when Hiro tests out Baymax’s flying capabilities. They triumphantly soar past reflective buildings, the giant, golden bay bridge, and up into the clouds. 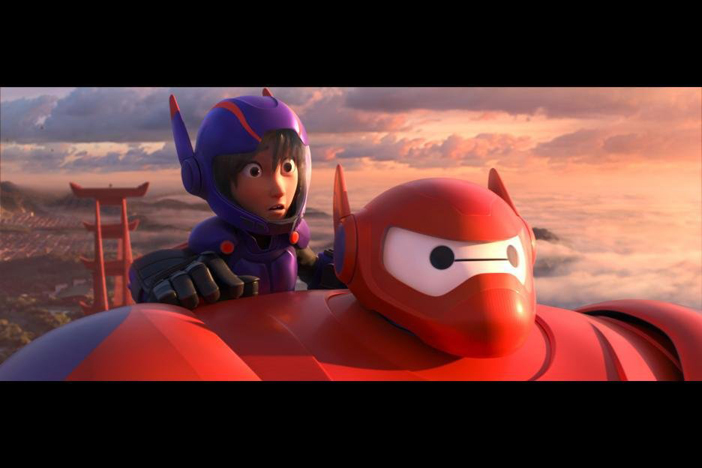 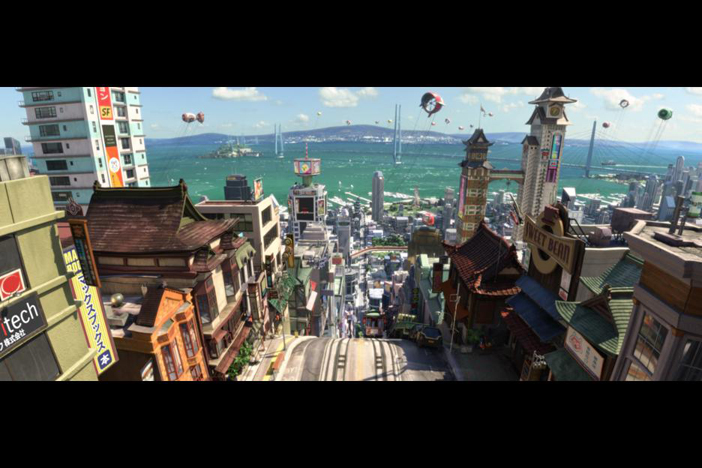 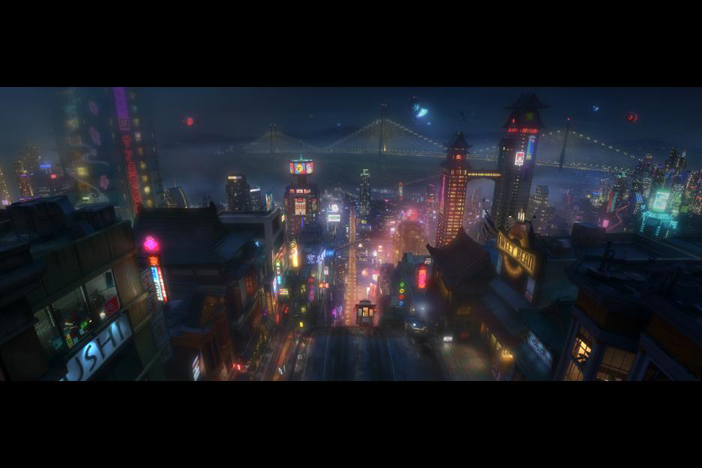 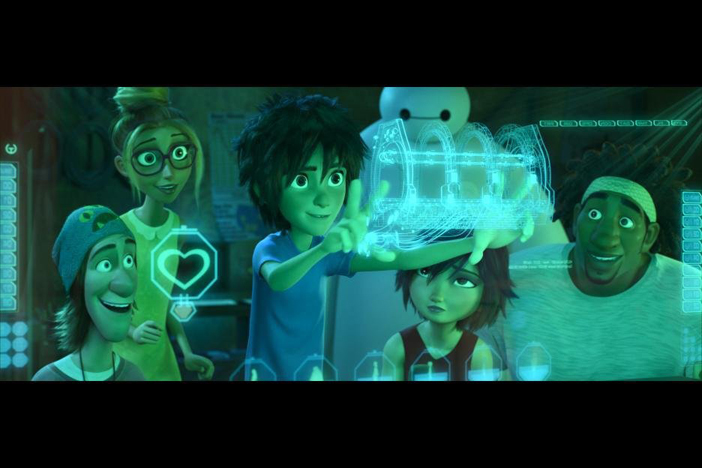 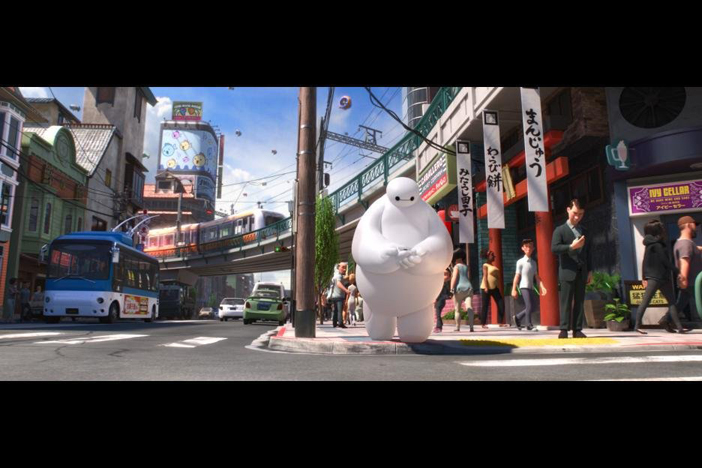 It would probably take multiple viewings to fully appreciate all the details the Disney team created. City crowds and buildings, far from being indistinguishable masses, comprise literally hundreds of unique figures, each one individually created. Touches like the moving strands on Honey Lemon’s gorgeous long blonde hair give realism to the characters. The film exhibits some fantastic lighting. During the day, even the all-white Baymax reflects amazing depth; and at night, the city glows with candy-colored neon lights softened by the marine layer.

Hiro’s microbots also feature an incredible amount of detail. Alone, they are simply shaped and only about an inch long; but they can be synchronized by a person’s commands to coalesce into complex structures – meaning the audience sees millions of individual pieces gliding spectacularly into various shapes, from towers to tentacles. When the microbots become sinister, they acquire an eerie, insect-swarming sound. It’s another instance when science takes on a magical quality in the film.

Big Hero 6 is strong as an action film and keeps an energetic pace; it contains several exciting, tense scenes, but balances them with hilarious exploits, like the entertaining montage of the team developing their new “super” gear and wicked-cool hero outfits. In a Batman-esque approach, the group members gain their heroic status through their intellect and creativity, rather than by harnessing the effects of a radiation-induced accident. There’s fun to be had with their newbie status as they adjust to their wearable gadgets and learn to work together as a superhero team – all the while being quite self-conscious of the fact that this is their one shot at having a cool origin story. We do get moments to catch our breath, as the whizzing science and action sequences are nicely complemented by some very sweet scenes of Hiro interacting with his brother and with the cute, lovable Baymax.

Just as Frozen focused on the relationship between sisters, the heart of Big Hero 6 lies in the relationship between brothers Hiro and Tadashi, as well as the surrogate family Hiro finds in Baymax and the other heroes. Combined with its humor and technical achievements, the story of friendship and family is raised to an extraordinary level that makes it widely appealing. Big Hero 6 is now in theatears.

Awesome characters, a playful spirit, and an emotion-filled story are enhanced with sparkling action and Disney’s technical magic – Big Hero 6 is a must-see for animation fans.