Straitjackets, handcuffs, jail cells, and the water torture chamber. Harry Houdini escaped from them all. But did you know his birth name was Erik Weisz? How about the fact he had a brother with magic skills of his own? Or that it’s possible he was a spy for the U.S. and British intelligence agencies? Intrigued? The two-part miniseries Houdini from History looks to expose all this and more.

Directed by Uli Edel, the nonlinear narrative is based on the book Houdini: A Mind in Chains: A Psychoanalytic Portrait. Audiences should realize it’s intended as a poetic drama rather than a documentary of unassailable facts. Liberties on Houdini’s life aside, we were bothered more by its frenetic pace and cheesy dialogue. “My greatest escape was leaving Appleton, Wisconsin.”

The series opens with a close-up of Houdini’s (Adrien Brody) pale, de-saturated face. As the frame moves back, we’re placed on Eads Bridge in St. Louis, 1914, with hundreds looking on. His wife Bess (Kristen Connolly) and stagehand Jim (Evan Jones) stand below on the ice-covered Mississippi as Houdini prepares to plummet into the frigid waters. The stark white and gray color palette echoes the ruthless simplicity of his fast-approaching encounter with death, and with a thought: “Fear is how I know I’m alive. Unlike other people, I don’t escape life. I escape death. Hell of a way to make a living,” he jumps.

We’re immediately thrown all the way back into Houdini’s childhood. Born in Budapest, his family moved to Appleton, Wisconsin where his passion for magic grew. We learn that he had the support from his loving mother, and that his stern father’s stubborn resistance to learning English cost him his job as a Rabbi. As the journey unfolds, we’re presented with Houdini’s magic act with his brother, his falling in love with Bess, and then finding his assistant Jim, who helps him create one dangerous act after another, until his unforeseen death at the age of 52. 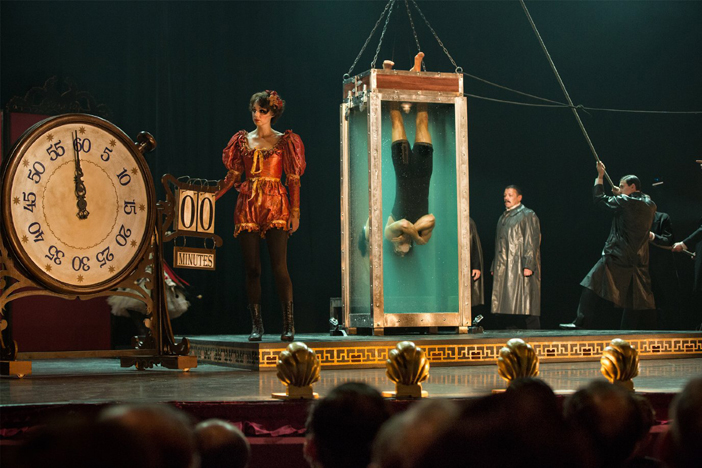 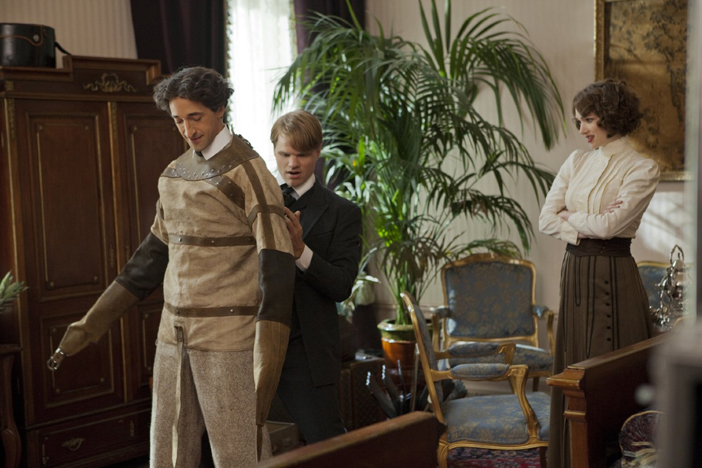 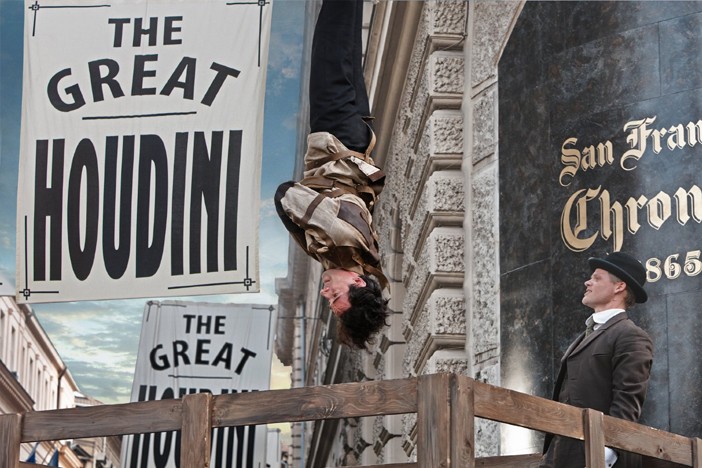 Houdini’s popularity was unparalleled. He was a pioneer of PR, the first Kim Kardashian if you will, but instead of being a porn star, he was a magician. The miniseries has Houdini showcasing his talents in locations around the world: London, Chicago, St. Louis, Washington, and Detroit. Cinematographer Karl Walter Lindenlaub imbued the many sets crafted by production designer Patrizia von Brandenstein with their own distinctive style. At the Johnston County Courthouse, where Houdini proposes to break free from a jail cell while still shackled, the environment is steeped in brown hues and warmer tones, while Chicago had darker blues and gray color palettes with soft, fluorescent lighting.

Edel and Lindenlaub used a perspective camera to tell us how Houdini escaped before or during his performances. A memorable sequence of this storytelling crosscut between two events. One scene has Houdini strung upside down, high above the street as dozens of on-lookers watch as he frees himself from a straitjacket. The other is of him at his hotel realizing that he must dislocate his shoulder in order to pull the trick off. It’s an excellent blend of storytelling and exposition.

Visual effects enhanced the imagery by literally going inside a trick or Houdini’s body. Supervisor Sean Farrow and the VFX teams (Spin VFX, UPP, Encore, Drawn by the Lift, House of Salt) did a phenomenal job illustrating this with digital X-rays of Houdini’s mouth concealing keys, or zooming inside locks to see how they’re picked. Houdini is known for offering strangers a punch to his stomach, which ultimately led to his death. When he was hit, VFX would give an inside view of the muscle tissue and how it reacted to each devastating blow.

Sound was just as engrossing. The effects from Houdini’s chains were thunderous. Supervising editor Michael Benavente and re-recording mixers Onnalee Blank and Ken Burton made every lock feel subconsciously unbreakable with hefty effects, making it all the more thrilling when Houdini escapes.

The miniseries also throws us into the seats of Houdini’s theater audience. In a sequence where he tries to free himself from the water torture cell, an enlarged clock is on stage counting the seconds, adding to the drama. Tick. Tick. Tick. A curtain blocks their view, and we hear the boiling murmurs from the crowd. “Get him out of there!” “Is he still alive?” Editors Sabrina Plisco and David Beatty kept the pace going, building the anticipation through a worried audience, and the sound compliments the growing tension with great success.

You can tell Adrien Brody, Kristen Connolly, and Evan Jones were committed to the roles, but the rapid pacing of the narrative doesn’t allow the characters to breathe and expand. It often feels like it’s breezing over significant moments in Houdini’s life; his espionage subplot (which never gets a chance to have an impact and is completely ignored in the second half), his attitude towards Charlie Chaplin, his love of flying, and his downfall when his shows weren’t selling out.

The second part focuses on his desire to expose those who claim to be mediums in the spiritual world. Houdini offers tens of thousands of dollars to anyone who can hold a true séances as he’s is desperate to communicate with his mother after her death.

Despite its shortcomings, Houdini provides a nice dramatic journey through the life of the famous magician making it worth a viewing.

While the story of Houdini's life moves quickly, it's definitely a fun watch. But be warned, not all of it is factually true.