A hinterland is a remote area, uncharted land lying inland from a coast – ostensibly removed from the dangers of urban life. In the Welsh coastal town of Aberystwyth, the scenery is incredibly inviting or it would be if it weren’t for the sordid murders detective Tom Mathias (Richard Harrington) investigates.

A four-part British crime procedural on Netflix, Hinterland follows sharp and pensive Londoner Mathias as he joins the rural seaside team comprising sidekick and lifetime local Mared Rhys (Mali Harries), as well as supporting investigators Sian Owens (Hannah Daniel) and Lloyd Ellis (Alex Harries). Mathias is a bit of a mystery himself – not much is revealed, but there are hints of an angsty background, apparently a prerequisite for television detectives.

On his first day, Mathias is greeted with a horrific bloody bathtub scene in the home of Helen Jenkins. Who would want to kill a 64-year-old lady? Apparently several suspects, we learn, as her unsavory past is gradually brought to light. The Brits know how to do gritty drama and this series is no exception. The tales are as brooding and sad as Harrington’s perpetual puppy dog eyes.

Hinterland, however, sets itself apart by putting a twist on the conventional noir lighting choices. While others would have a chilling scene play out while cloaked in nighttime darkness, Hinterland stages them through the early morning sunshine. Cinematographers Hubert Taczanowski (episodes 1 & 2) and Richard Stoddard (episodes 3 & 4) helped achieve Hinterland’s stunning look. 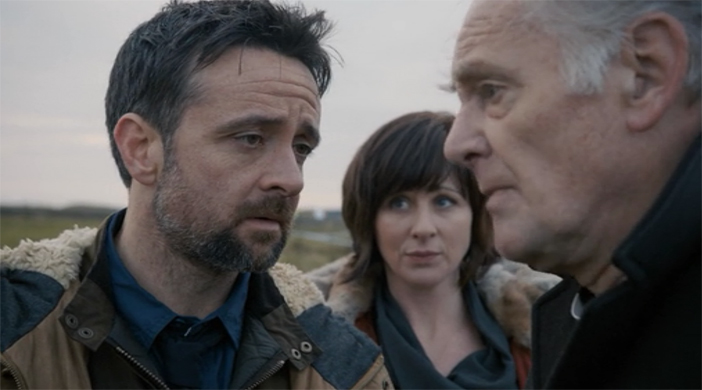 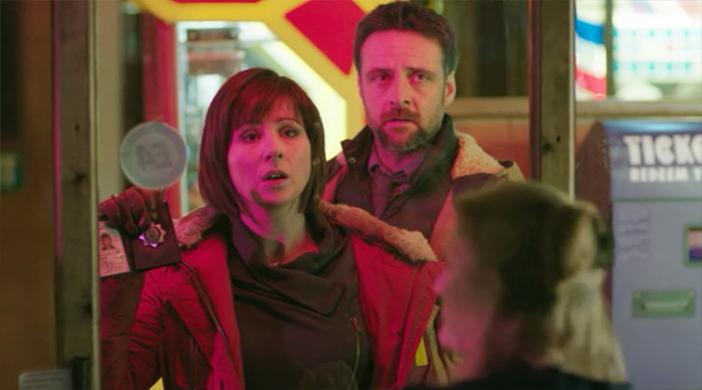 The day shots are drenched in blue and the town looks crisp and airy. Whether Mathias is out on his morning runs or exploring the forest for evidence, twisted bare trees and grey-clouded skies fill the background. Characters often look like they’re chilled to the bone. Conversely, evenings are shown with warmer textures, as when Mathias and Rhys search out a glowing arcade or an aged, golden-hued home. When Rhys serves an exhausted Mathias some hot tea in the wee hours, her home is a comforting safe haven of rose and buttery yellows.

Mathias doesn’t express much verbally in the investigation process, but his laser focus is articulated through tight shots of his face while he’s discovering a key clue or looking intensely at old projector footage, searching for answers. Adding to the suspense and creepiness are claustrophobic scenes where the team treads through narrow stairways and dusty attics.

Bringing in a horror element that makes it feel as if the characters are being watched, they’re sometimes voyeuristically shot by a shaky handheld camera that peers at them through dirty windows. These techniques infuse the show with tension, using psychological suspense and a gothic atmosphere instead of overt violence. There’s an overall vintage feeling, in which scissors become more terrifying than any gun. These effects, along with allusions to Welsh folklore, bring an eerie, storybook vibe to this contemporary world of crime.

The story moves at a very methodical pace. After the allure of the moody landscapes and initial desire to vacation to this otherworld wears away, it takes some patience to view this slow-burn series whose episodes are a movie-like 90-minutes each. Harrington is a compelling actor to watch, but the story unfortunately does not feature much of his personality. However, those who are tired of the frenzied editing and hyper slickness of CSI: Insert City will find it refreshing.