This year marks the 75th anniversary of Batman’s very first appearance in Detective Comics #27. Since his debut, he’s starred in two serials, eight feature films, over ten animated series, numerous animated films, and of course, one fondly remembered television show in 1966 – “Come on, Robin, to the Bat Cave! There’s not a moment to lose!”

For the Caped Crusader’s diamond anniversary, Fox and creator Bruno Heller (The Mentalist) are bringing us a new series: Gotham. Despite being heavy on character introductions, the pilot looks beautiful and it promises to be worth tuning in week after week.

Set years before the Dark Knight stalks the streets, Gotham follows homicide detective James Gordon (Ben McKenzie), a newcomer on the Gotham City police force, as he’s called in to solve the most famous case to hit the city: the murder of Martha and Thomas Wayne.

At the crime scene, Gordon meets the slain couple’s son and traumatized survivor, ten-year-old Bruce Wayne (David Mazouz). He promises the boy he’ll find the killer, foreshadowing their relationship between the two of them we all know so well. While investigating the case, Gordon navigates a city where everyone seems to be working for the mob in some capacity, including nightclub owner Fish Mooney (Jada Pinkett Smith), her flunky Oswald Cobblepot (Robin Taylor), and even Gordon’s own partner, Detective Harvey Bullock (Donal Logue).

Visually, the pilot is stunning. Director Danny Cannon (CSI), cinematographer David Stockton (Revolution), production designer Doug Kraner (The Tomorrow People), and art director Laura Ballinger (The Fighter) have built something that feels like a film. It was captured on the Arri Alexa HD with Cooke primes and Angenieux zoom lenses, and lit by Arri-Max HMIs, Molebeams, and programmable LEDs.

The lighting was especially fantastic. In television, it can sometimes just be there, an unnoticed presence that does its job and little more. Gotham’s light, however, dances through multiple scenes, giving unexpected energy to moments that could have just as easily been boring expositions.

One sequence focuses on Gordon and Bullock discussing the case with two other detectives in a diner. As they speak, passing headlights shine directly through the windows, at times threatening to wash out the cast. Lens flares have been in vogue for a while now (Thanks, J.J. Abrams), but Cannon and Stockton used the technique masterfully, allowing the energy of the scene to never drop to a lull.

You might expect this show to nab its visual tones from Christopher Nolan’s The Dark Knight and create a darker, shadowy world, but it doesn’t. Instead, it harnesses images with natural light and contrasting color palettes. The interior fixtures illuminate an eerie warm glow with motivated exterior light from large windows and doorways bathing characters in a cold, blue hue. It feels like the warmth is fighting against the blues of the city in an uphill battle, echoing Gordon’s crusade against corruption. This subtext is especially evident in a confrontational scene when a mob boss stands soaked in the blue hue of Gotham while Gordon is bathed in a warm orange in contrast.

The sound department led by supervising sound editor Mace Matiosian did a fine job building Gotham’s soundscape. A heavy use of metal scraping sounds throughout the episode creates an irritating quality, like an itch you can’t scratch. The soundtrack featured jarring string guitars and effects like metal fire escapes, swinging knives, and gunfire. It added a layer of cold soullessness to the streets of Gotham, threatening to drag down honest cop James Gordon. 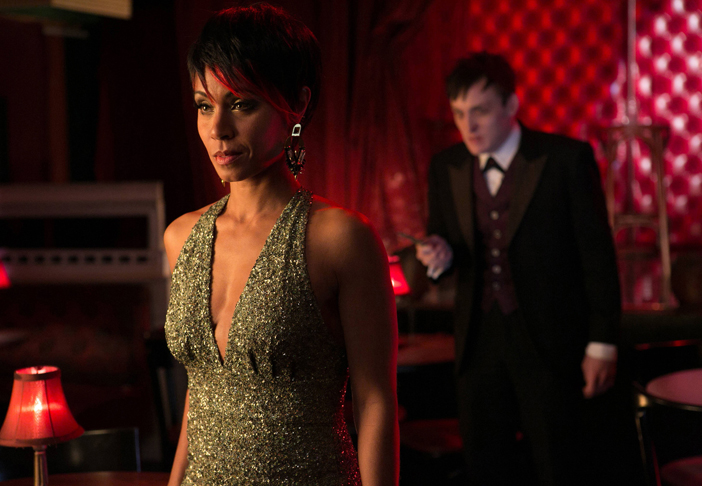 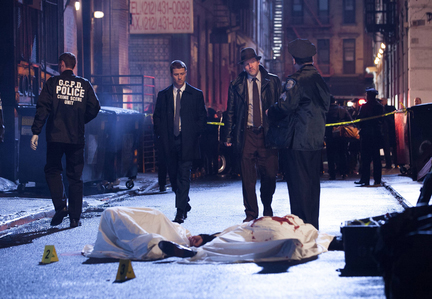 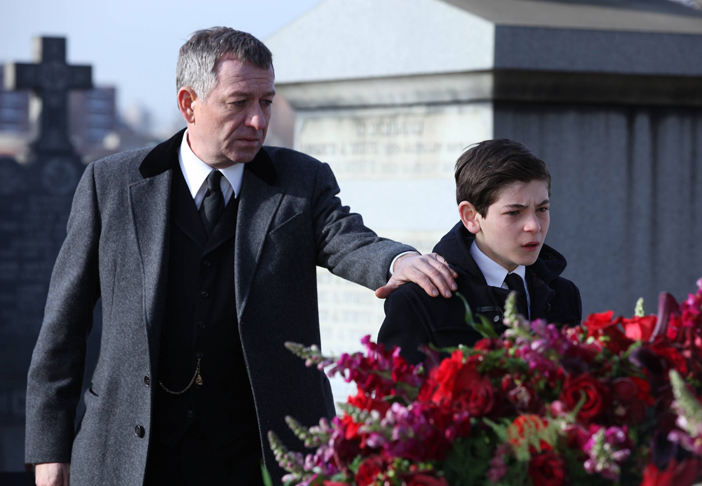 Gotham truly sprang to life when the visual effects team worked their magic on the footage. The show is a film noir cop drama, not Transformers, so VFX could focus their energy and talent on transforming New York into Gotham City, adding elements like gothic creatures and atmosphere. Their work is evident from the very first scene as a young Selina Kyle, the future Catwoman, runs across rooftops adorned with VFX-added gargoyles. She stops and surveys a cityscape that no one would mistake for New York. The VFX blends beautifully with the surroundings, creating an entire city without being obtrusive.

Editor Daniel Gabbe kept a tight pace throughout the show, heightening the tension wherever possible. A good example is where Gordon confronts Mooney over her connection with the Wayne murders. Gabbe keeps the shots on screen for a second or two longer than normal to emphasize the threats implicit in the conversation, ratcheting up the tension and pushing the viewers to the edge of their seats.

Overall, though, the episode felt a little choppy. The main issue was the introduction of so many characters from the Batman mythos. While the inclusion of characters who become Poison Ivy and The Riddler may put a smile on the faces of true comic aficionados, it felt forced here, their appearances unnecessary in terms of advancing the story. On the other side of the spectrum, Fish Mooney suffered from a lack of identity. Pinkett Smith seemed to bounce between Eartha Kitt and Tony Soprano with a few stops in between during her scenes. Hopefully these issues will work themselves out moving forward, as the show can focus on developing its important characters rather than introducing as many new faces as possible.

It’s been nearly 50 years since we last saw a live-action Gotham City on our televisions. While this is a vastly different series, Gotham will be a show worthy of space on your DVR – “same Bat-time, same Bat-channel.”

Scheduled to premiere Monday, September 22nd, 2014 on Fox, the series has a 16 episode order.

With stellar acting and mindful storytelling, fans should enjoy the new spin on such popular characters.