Set in the unforgiving wilderness of the Himalayas, the latest installment of the Far Cry franchise is sure to take your breath away. Feel free to embark on a multi-day hunting trip, search for hidden treasure while riding an elephant, or cruise around in a gyrocopter launching explosives at any enemies you spot along the way – Far Cry 4 won’t judge you.

Ubisoft Montreal headed the title’s development collaborating with Red Storm Entertainment and Ubisoft’s Toronto, Shanghai, and Kiev divisions. Overseen by creative director Alex Hutchinson and developed on a modified Dunia Engine, this first-person shooter immerses players in a cooperative open world. Gamers will now be able to drop into their friends’ games, and spend hours exploring and conquering the vast interactive landscape as a team.

In single player campaign mode, you are Ajay Ghale, a man who travels to the remote mountain region of Kyrat to scatter his mother’s ashes, fulfilling her dying wish. He finds himself caught in the crosshairs of a brutal rebellion against Pagan Min, a cruel, impulsive leader who would execute his own soldiers without batting an eyelid. Troy Baker, known for voicing iconic characters such as Joel in The Last of Us and Booker Dewitt in Bioshock Infinite, lends his talents to this dangerous antagonist.

Art director Joshua Cook and level designer Matt West brings a stunning level of visual detail to the game’s environments, ranging from epic snowcapped summits to lush green valleys. The sound design, headed by audio director Tony Gronick, truly engages players in the untamed world of Kyrat. In the gameplay footage released at E3, we hear the peaceful chirping of birds interrupted by the booming of an explosion, the scream of an eagle, and the ominous creak of a rope bridge, reminding players that danger is constantly lurking.

Far Cry 4 focuses on versatility, giving enemies heightened unpredictability. Players will no longer have the luxury of anticipating an attack, as threats can descend from above or pop up from below throughout the diverse, mountainous terrain. The grapple is a new gadget added to the arsenal, allowing players to swing across huge gaps to reach their next destination.

A rich new feature in this title is the impressive artificial intelligence of animals roaming the world. Let’s say you spot a goat on the side of a cliff, minding its own business. Suddenly a giant eagle swoops down and seizes the goat, flying away with its next meal. This isn’t scripted into the game. Animals are programmed to roam freely and will follow the natural order of predator versus prey if their paths happen to cross. These creatures, ranging from leopards to honey badgers, will be your trusted allies and deadly enemies throughout the game.

Kyrat is a living, breathing world filled with perilous danger, loot, and secrets. We can’t wait to hop on an elephant and start exploring. Far Cry 4 arrives November 18th, 2014 for PS4, PS3, Xbox One, Xbox 360, and PC.

Check out some of the concept art below: 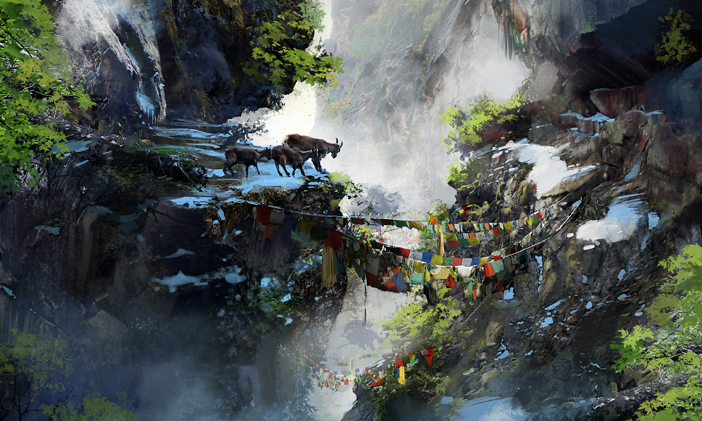 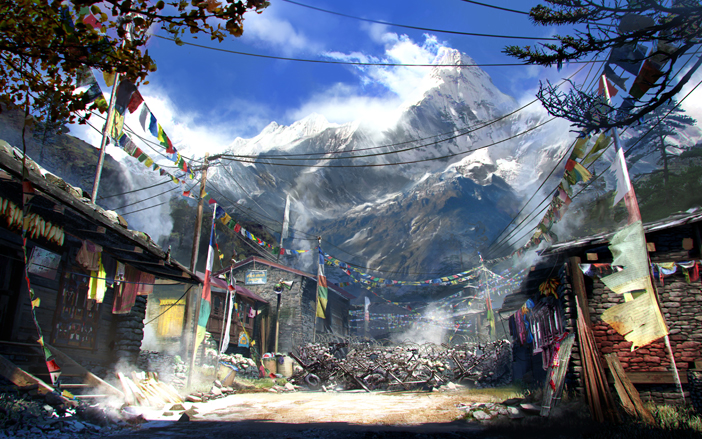 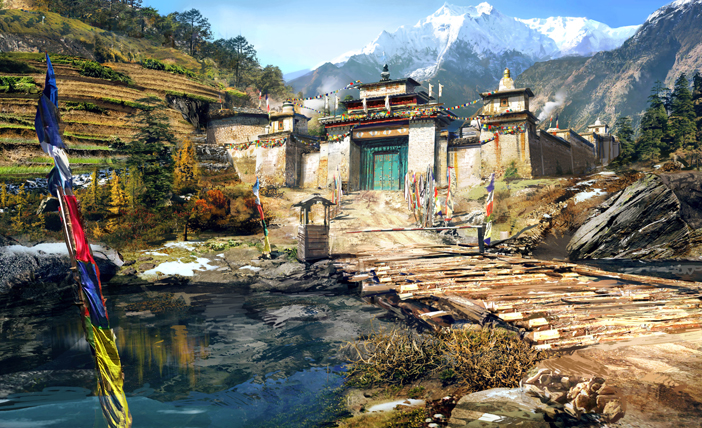