Kicking off its second season, The Drive: Pac-12 Football gives viewers a unique look inside UCLA’s football program in the form of a fifteen episode docu-series. “It’s authentic reality,” producer and cinematographer Jim Jorden says of the project. The all-access show not only captures the moments inside the locker room and on the field, but shows us the day-to-day lives of the coaching staff and players in their pursuit of a Pac-12 Championship.

Living in Chicago, Jorden loved watching NFL Films Presents and got hooked on the game in between watching and throwing the ball with his dad. His dream was to work for the NFL and oddly enough he got the chance. “I loved the NFL’s storytelling, and was able to get a job there and helped to start Hard Knocks while I was there,” says Jorden. “Then in the late ’90s I was introduced to NASCAR. I didn’t know anything about it, but I thought, why isn’t there a production company doing something for racing like the NFL is doing for football. So I did some research and started a production company in 2004 in Charlotte, North Carolina.”

It wasn’t until 2010 that Jorden received the call from the University of Virginia that would eventually evolve into The Drive. “They wanted me to create a show similar to what we did with HBO’s 24/7 Jimmie Johnson, and in 2012 while I was still at NASCAR, we did eighteen episodes that led up to the UVA’s first game,” Jorden recalls. “That’s when I started to think about other series, which led to The Drive. A lot of people compare it to Hard Knocks, but it’s not. Hard Knocks is five shows that run during training camp. There’s not really a sports show out there that airs every week as the season goes on where the participants in it can watch it. It’s totally non-scripted and you have no idea what’s going to happen. You’re rolling the dice and trying to tell an authentic story. That pressure, that excitement is what’s great about the job.” 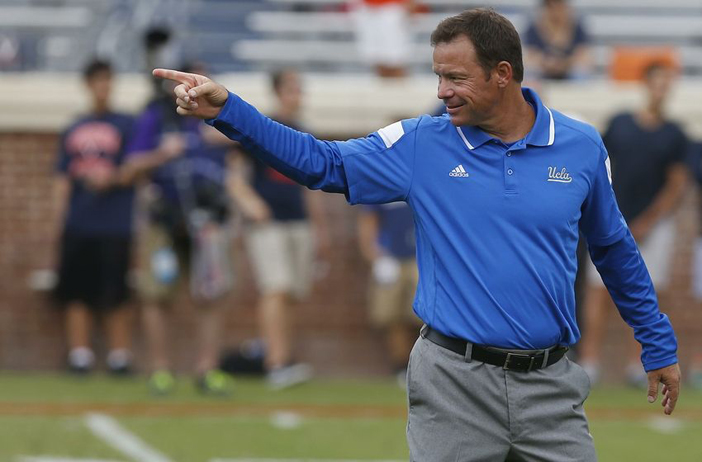 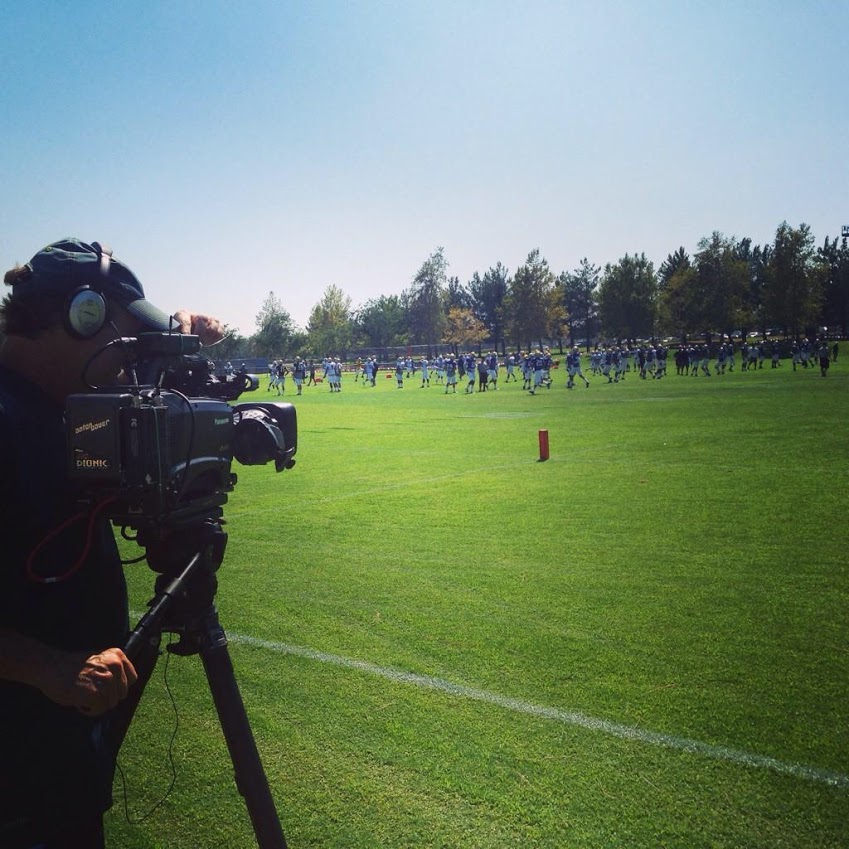 Every Wednesday the Pac-12 Network airs a new thirty minute episode, but the effort that goes into their creation is centered on a grueling production schedule. The small, three-camera crew will follow UCLA’s main practice starting Tuesday and Wednesday. Then they’ll bump up to six cameras or more to cover game day. Afterwards, they’ll rush to the editing room to put together a rough cut for the Pac-12 Network to look at on Sunday. Another rough cut will go out to the University for viewing on Monday. When the notes are compiled, they’ll resemble the show for a Tuesday final edit when it’s color-corrected and mixed for sound. On Wednesday, all the titles are added and delivered for a 7:00pm PT airing.

During production, Jorden uses a combination of Canon C500s, C300s, 1D-Cs, and XF105 HD camcorders to make the show a reality. “We try to be a fly on the wall. In the past, everybody had these big shoulder-mounted cameras with long zoom lenses. You’re so noticeable. Canon’s great. They’re small, versatile, and great in low light. We move across so many different latitudes, and the 35mm sensor gives us a sharp image with the glass. The quality of the show, it’s really like nothing else,” admits Jorden.

Creating a narrative that’s true to the players and to the school is important to the producer. “There’s so many different personalities that make up the team. From the coaching staff, the student athletes, to the people who support the program, we try to find stories that we think will be interesting and tell them the old-fashioned way,” says Jorden. 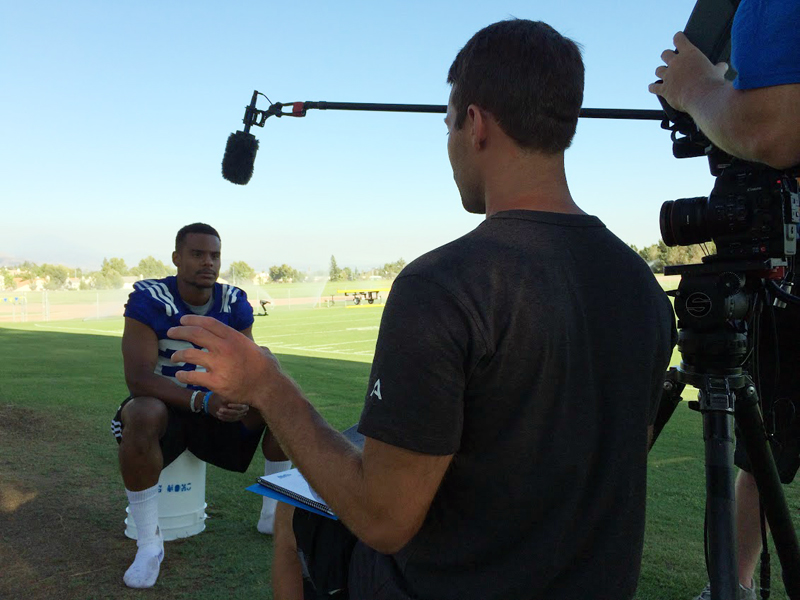 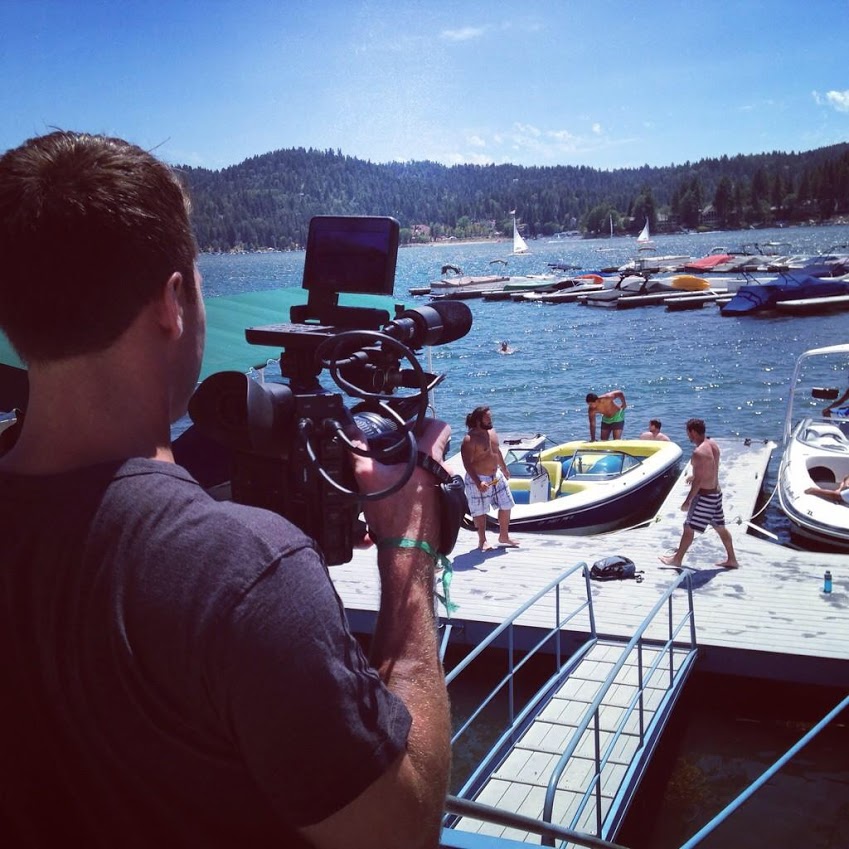 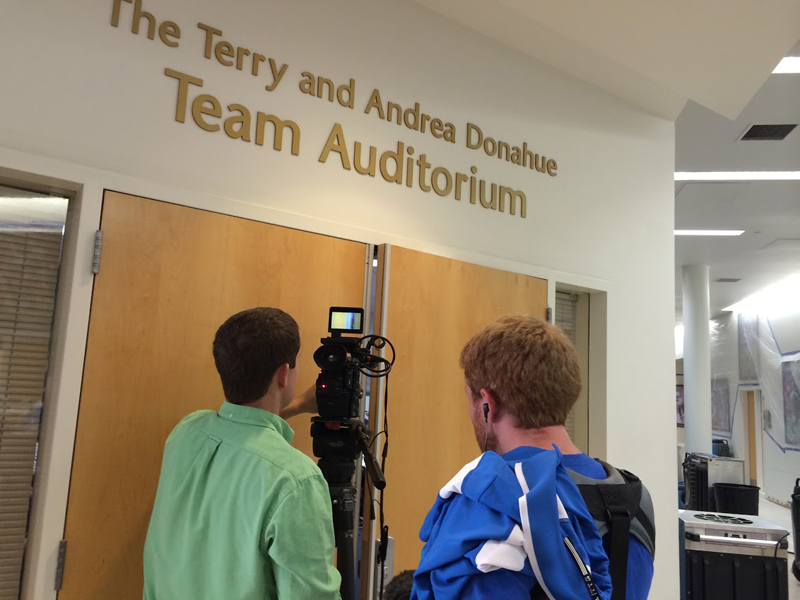 Helping propel those personalities are on-camera interviews. In order to capture those moments, Jorden will scout the location and pick a spot that will be the least challenging for post to fix in terms of removing unwanted sounds or image issues. “We’ll find a place with lot of depth of field so we can open up a lens to throw the whole background out of focus. We’ll fill the image with basic lighting, but if we can, we’ll use the California sun. There’s nothing like that late golden hour or practice at 7am when the sun comes up, it’s gorgeous,” Jorden admits.

Shutter speed also adds to the excitement and intimacy of the show. “What I learned at NASCAR is that shooting sports is really a few things – lenses, angles, and film speed,” says Jorden. “You could be in the same place getting the same shot, and if you have another lens or slightly different angle or speed, the shot can become a whole multitude of different things. With The Drive, we will stay at 24fps to give us more edge and play some stuff at 60fps or 120fps. When you see all the detail of the players’ sweat rolling off their brows or grass leaping from their cleats, it’s awesome.”

Post is something the producer never overlooks. “Our audio mix and color correction are two of the most important things on the show. We have footage from other cameras like the GoPro, and it’s crucial for us to match color all the way through so the viewer doesn’t subliminally feel like there’s anything wrong,” explains Jorden. “We have a great team, and it’s a lot of dedication over fifteen weeks. Hopefully by the end, viewers will get an authentic sense of what UCLA is as an institution, understand coach Jim Mora’s philosophy, and realize the types of pressures these student athletes face when they have to balance academics, the game, and family.”