Plain and simple, Hinterland is a series that deserves to be watched. The visually captivating, four part detective drama on Netflix ships us to centuries-old Aberystwyth in north Wales where DCI Tom Mathias (Richard Harrington) and DI Mared Rhys (Mali Harries) search for the truth in a town riddled with murders, lies, and deceit. Directed by Marc Evans and with cinematography by Hubert Taczanowski, the first episode, Devil’s Bridge, sets the tone for this utterly beautiful miniseries. It’s like staring at a John Constable landscape painting – subtle, lush, memorable.

Born in Poland, Taczanowski moved to New York after finishing film school, where it took him roughly seven years to catch a bigger break. “I met an English student out there who was going to Columbia, and I started shooting all his stuff while doing music videos. When he graduated, he called and asked me if I wanted to come to London to work on a film he was directing. The Young Poisoner’s Handbook was the project they did back in 1995 and Taczanowski hasn’t looked back since.

When Hinterland came along, the cinematographer already had the familiarity of working with Evans from the 2002 film, My Little Eye. “Marc told me about a job he was doing in Wales and explained that it was going to be very different to normal police dramas. I was new to England, having moved from Los Angeles to live with my wife, and I’d never been to Wales. I met Marc and Ed [executive producer Ed Thomas]over in Cardiff and we drove to Aberystwyth, which is about five hours away,” says Taczanowski. “The thing about these Welsh guys is they really love their country. Ed was pointing out the different landscapes and areas we could shoot. It became very contagious.”

The script was finished shortly after the road trip to Aberystwyth, and they were given about five weeks for preproduction. “We had quite a long prep. Normally it’s about two to three weeks, but this was nice,” admits Taczanowski. “We spent a lot of time with production designer Eryl Ellis looking at locations, especially the interiors. We watched the German film The Life of Others, soaking up whatever they were doing to try to put that on screen.” 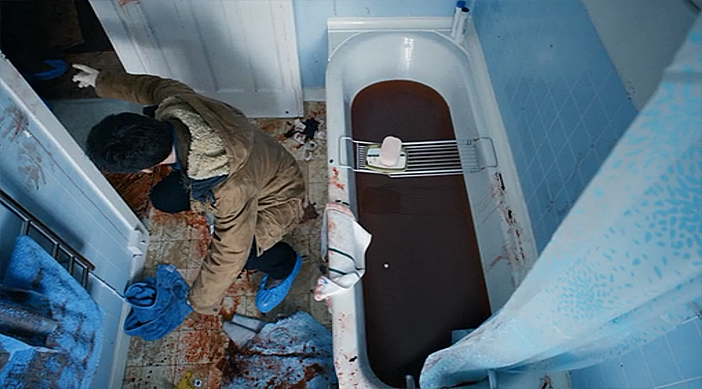 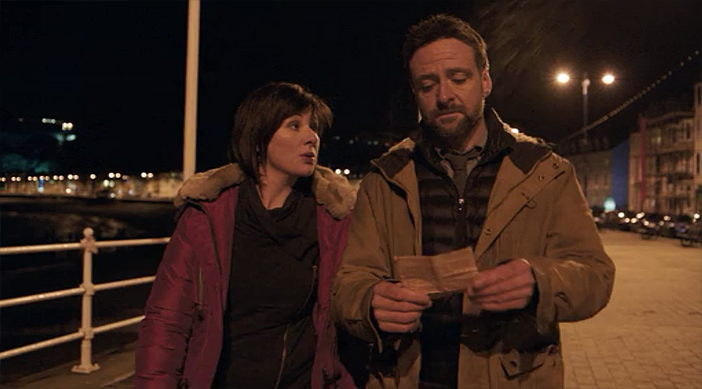 Devil’s Bridge has Mathias and Rhys investigating a blood-soaked bathroom and the disappearance of Helen Jenkins, a sixty-four-year-old woman who ran a children’s home perched above a ravine spanned by Devil’s Bridge. The narrative has its unnerving twists, but the blue color palette that links each scene together throughout the episode is subtle and clever. In everything from the costumes, the bathroom tiles, the walls, to the props and backgrounds, it’s fun to pick up the color nuances as the story unfolds.

Taczanowski looked to the Arri Alexa and Zeiss Master Primes to capture the material and vivid countryside. “Marc suggested we use the Cooke lenses, but I knew we were going to need to be much more portable, and the Zeiss lenses are a little lighter and easier to carry,” says Taczanowski. The DP also operated the single camera used during shooting. “It was a location-heavy project, and they really wanted to show the Welsh landscape – the colors and culture in scenes. We didn’t have a big budget, but in terms of shooting locations, they were very generous.”

Hinterland was funded by S4C and the BBC, and according to Taczanowski, the BBC’s approach to television is a lot different than American TV. “They really don’t care about ratings as much. It’s kind of like public television – you pay the fee each year and they have to spend it. This allows you to be more artistic and push the envelope, because they don’t have the burden of needing viewership to generate advertising dollars.”

The unique thing about Hinterland is that the detective drama was shot in two languages. “We essentially did two episodes in one,” says Taczanowski. “We would shoot an English take and then a Welsh version. It was strenuous on the actors, and where we had to adjust was during the walk and talks or tracking shots. The Welsh takes would be a little bit shorter than the English ones so we had to react to that.” 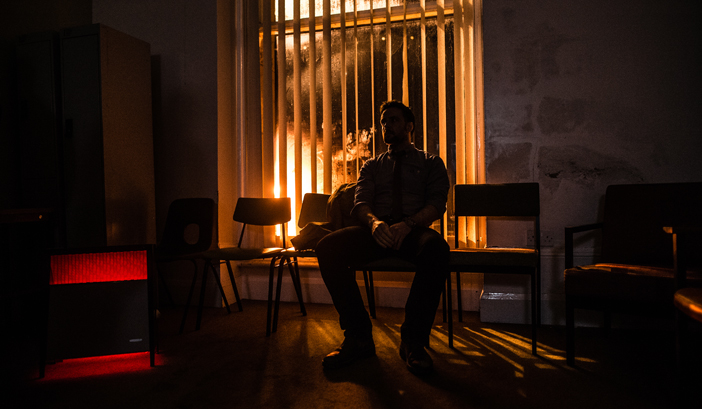 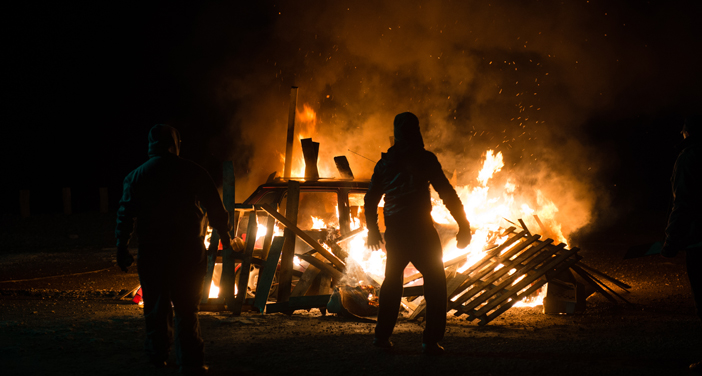 Production would allow the actors to determine the language shooting order based on the emotions played out in the scene. “Normally, we would shoot two or three takes of the English version, then switch over to Welsh. But instead of going back to English, they would stick with Welsh, then go to English,” Taczanowski explains. “The entire crew understood what was going on, and everyone was patient with the actors, especially during the more poignant scenes. After about a week, we didn’t even notice the change between two languages, it was just normal.”

What aided the shooting to stay on schedule was the focus puller Barny Crocker. “We don’t put any marks on the ground for the actors, so it frees them up,” mentions Taczanowski. “I remembering doing one of our first rehearsals with camera and Richard wanted to know where he should stand. I would say, ‘Just do what you need to do and we’ll find you.’ It’s how great Barny can do this that allows the actors to really go for it.”

The cinematographer also had the help from gaffer Llyr Evans to spark lighting. “There wasn’t a big lighting package to speak of,” says Taczanowski. “Llyr is based out of Cardiff and he worked on the Sherlock series with Benedict Cumberbatch. He has this knack for lighting small farm houses and dense locations, creating magic with a little bit of stuff.” The crew used natural light to motivate scenes, with their biggest fixture being a 6K. Kino Flos and 1Ks were brought in for fills or the occasional reflector. Staying around ASA 800, Taczanowski would go up to 1600 for night scenes. “We knew it was going to be for TV, so I wasn’t worried about the noise from blowing the image up.”

The show aimed to represent the city as realistically and naturally as possible. “We didn’t want people from Aberystwyth to say, this is not where I live,” notes Taczanowski. “Marc wanted daylight a little bluer and desaturated with greens and yellows in the background. When we went to night, if there was tungsten on the street, we didn’t pull it out, but we went for it.” Coverage and composition took a more traditional path, allowing the energy of the scene to dictate shooting style. “Marc likes using the entire spectrum – when he feels like it’s a handheld shot, we’ll go handheld. When the actor is giving a powerful performance, he’ll use a tracking shot. But he doesn’t overshoot. When he has what he wants, there aren’t any additional setups for coverage.”

One of the more intense sequences where acting dictated coverage was in the interrogation room. Mathias has just apprehended Hywel Maybury (Paul Morgans), a suspect in the murder case. Mathias and Hywel sit across from one another, with Hywel trembling in fear as question after question is being asked. The location was a set built in a nearby university, and the small room was lit with a 4K coming through a one way mirror. “The mirror was spreading the light very well – nice and soft. We didn’t need to use any other fill lights, just a reflector for the eyes,” explains Taczanowski. “Marc didn’t want to shoot through the one way mirror, he wanted it to be more personal, so we photographed it very simply by putting the camera in the room. He wanted to show the graphic detail of what Hywel was going through.”

When it came time for post, Taczanowski worked with colorist Matt Mullins. “We pulled back the yellows in the sodium vapor lighting to make them a little more pleasing and not as rough, and kept the landscape a little coldish and blue – there wasn’t that much work to do and we really liked how it turned out.”

The first two episodes of the miniseries were photographed by Hubert Taczanowski, with the final two done by cinematographer Richard Stoddard. Each episode saw a different director with Ed Thomas directing the last episode, The Girl in the Water. You can watch each one on Netflix now.