Based loosely on the comic of the same name, iZombie is the story of Liv Moore (Rose McIver) who, after being bitten by a zombie at a party, is now trying to deal with her new life as one of the undead. Formerly a med student with a promising future, Liv now works in a police morgue, eating the brains of the deceased in order to stave off becoming a full zombie. However, she discovers that by eating the brains of the dead, she absorbs their memories, leading her to help a detective (Malcolm Goodwin) on his murder investigations.

Being a crime-of-the-week procedural with a cute but strong female lead has led some to describe the show as “Veronica Mars as a zombie”, a comparison that Thomas isn’t discouraging.

“Diane and I have worked on a lot of stuff together,” said Thomas. “We have a very similar aesthetic. I think our shows are going to be dramas with a sense of humor, so I think tonally we’re going to live in that world.” But he added, “People often put Veronica Mars and Buffy the Vampire Slayer in a similar category, and I would say that iZombie gets closer to Buffy than we did with Veronica Mars.”

After showing the 12-15 minute extended look at the series, the panel took questions from the audience. When asked what brains taste like, McIver said, “We’re working on it. We still haven’t quite nailed down a recipe. We’ve got fondant, and it’s this dense sugary icing. And then the other option was soy protein, drenched in salt and hot sauce. So, it’s not delicious, but I feel like there’s a whole cuisine range we’re going to work on.” 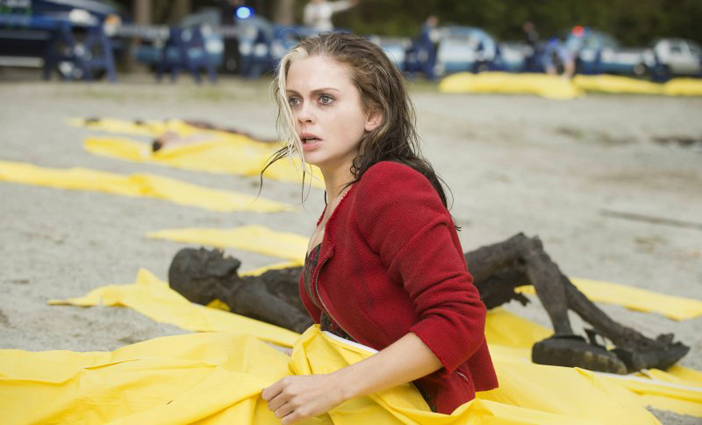 When asked about her makeup process, McIver said, “We spent about four days… preparing the makeup for the pilot because it is so key to the character. We had to work out a sheen. We created this white with almost a little bit of blue, we didn’t want to go too gray, so we went for this kind of spray. We have a wig and then at various stages of me being hungry I get darker and darker around the eyes and I get redder and redder in the eyes. It’s a long time in the chair, it’s a cool little thing to create.”

Thomas added, “We want her to be super pale, but we still want her to be attractive and desirable,” at which McIver cracked, “I believe the term is ZILF.”

The iZombie pilot was directed by Rob Thomas with cinematography by John S. Bartley and Viet Nguyen editing the picture. Capturing the production sound was mixer James Kusan (Juno, I, Robot) alongside boom op Ian Tarasoff.

The series is slated for a mid-season premiere sometime early 2015. You can catch a few screen shots from the show at the 48 second mark in the video below.