British director Gareth Edwards hits us with Godzilla, the tail swinging, atomic breath wielding badass we were first introduced to in 1954. Scribed by Max Borenstein along with story by David Callaham, the plot takes off when Dr. Serizawa (Ken Watanabe) and his partner Dr. Graham (Sally Hawkins) flys a chopper into a mine, where they discover a pod containing an escaped MUTO (Massive Unidentified Terrestrial Organism), aka Godzilla’s bug-like enemy.

Miles away in Tokyo, Joe Brody (Bryan Cranston) and his wife Sandra (Juliette Binoche) lives with their son, Ford. The two work at the Janjira Nuclear Power Plant, a feeding ground for the MUTO. A normal day spawns until tremors hit the station causing a deadly chain of catastrophic events.

We jump ahead fifteen years and Joe Brody’s son, Ford (Aaron Taylor-Johnson) is now an explosive expert for the Navy and lives in San Francisco with his wife, Elle (Elizabeth Olsen), and their son, Sam (Carson Bolde). A phone call gives way that Joe was arrested in Tokyo where Ford returns to bail him out.

Joe now lives with the obsession of what went wrong at the plant so many years ago. He detected an abnormal sound pattern in the tremors and is looking for answers. Real answers – not the ones he’s been told. He convinces his son to sneak back to his childhood home with him where we learn his hunch is right. Cue the MUTO escape and the start of Godzilla’s spectacular rampage. 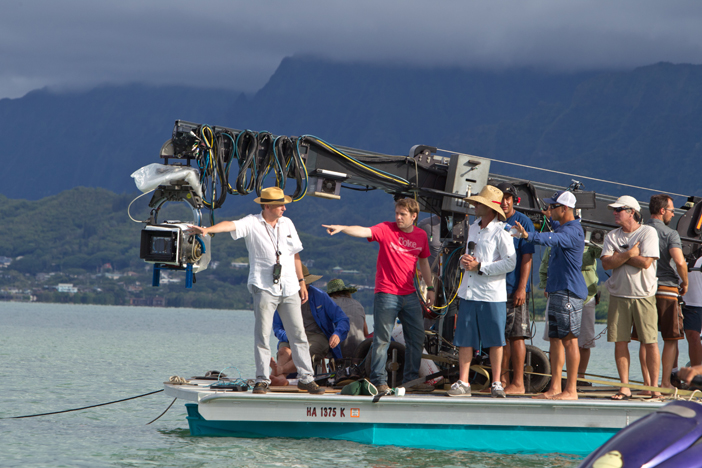 On set of Godzilla 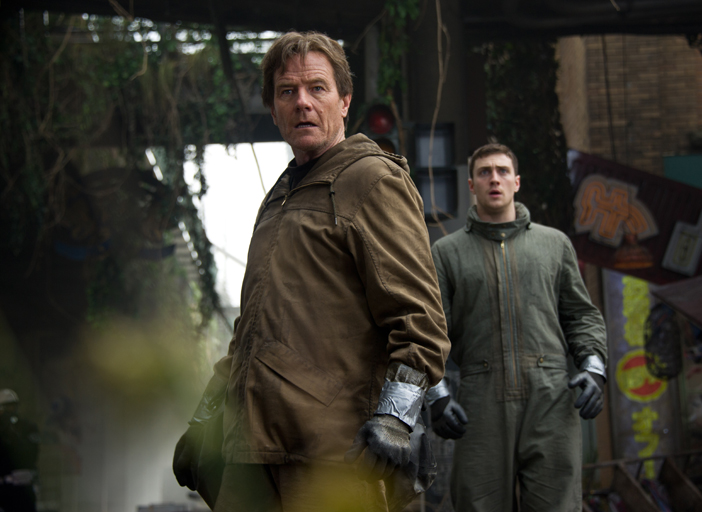 Sitting through the top-heavy plot, you understand Edwards’ desire to cement a human element to the picture which makes Godzilla’s first reveal much more impactful. To create its epic feel, 2.40:1 was chosen shooting on Arri Alexa cameras with Panavision C series anamorphic lenses. (PVintage, ATZ, AWZ2 and Cooke were also used).

The spectacle of the movie is definitely admiring, but the realistic details of the cinematography are what helped shape its visual tale. The contrast in shot selections by Edwards and McGarvey were methodically robust. In an early scene that depicted a young Ford making a poster for his father, the camera was controlled, creating a sense of environmental stability before switching to handheld to heighten the chaos of Godzilla’s battles. It’s those kinds of subconscious subtleties in composition that resonates with viewers.

Watching the 350-foot Godzilla crash through Hawaii and then onto the streets of San Francisco (shot in Vancouver); you realize how important scale can be. Visual effects did a phenomenal job. I mean, yes, the technology that is available is astonishing. Yes, there’s an enormous budget behind them. But you can still screw it up. Easily. Helping to create Edwards’ vision and the onscreen realism of Godzilla was the genius of Matt Allsopp, Weta Workshop’s Andrew Baker, Christian Pearce, Greg Broadmore and Moving Picture Company. The details made Godzilla strong yet graceful, bearing an emotional force making you feel bad during the film’s climactic ending.

Sound was the biggest smile to the movie. Godzilla’s famous roar was re-created by Aadahl and Van der Ryn. When you hear it for the first time, it gives you goose bumps. It’s so powerful you can’t blink – you’re just left staring while your mind says “holy shit.”

Edwards provides some stellar creativity with sound during the San Francisco scenes within the battles between Godzilla, the MUTO and the U.S. military. The destruction of the city is inevitable. Buildings are being knocked to the ground, streets are flooded with people’s screams of terror and the military is firing from helicopters and planes… You can imagine the sound track is littered with effects and ambiences, but Edwards gives the audience a tonal rest by changing the destruction’s point of view.

He methodically weaves the camera from inside buildings or onboard helicopters before we’re pushed back into the chaos of the scene. In this brief pause, we hear just an echo of the destruction that’s happening a few feet away. Creating this audio valley is such a smart tool, and I wish more storytellers would use it. Near silence is a good thing. It’s a great thing actually, and creates such an impact when we do hear something again. 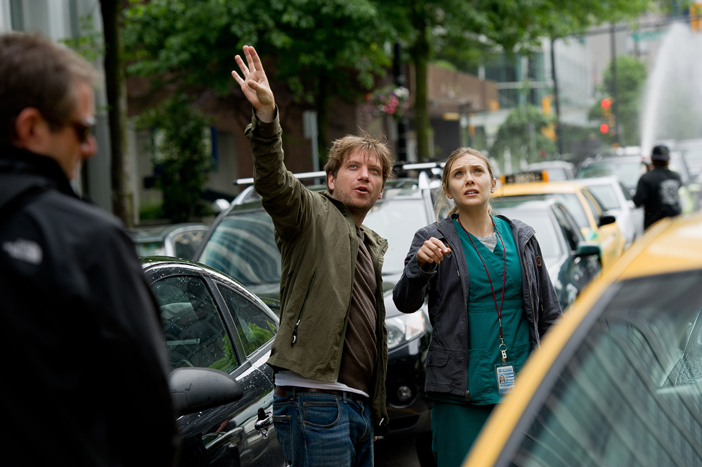 The HALO jump stunt leading up to the destruction of San Francisco is another set piece that’s pretty unforgettable. It’s just plain cool. A cloudy sky is illuminated by a dozen jumpers with red smoke trailing from their ankles. The scene was constructed using a combination of fully composited digital shots, green screen work and stunt performers freefalling from shoots over a desert.

The film has great balance– a humanizing story with epic visuals that doesn’t feel gratuitous in anyway. You won’t even find a random shot of a girl getting undressed. Does it live up to expectations?

The sound design far exceeded our expectations, and the visual effects were just as good. While it's not necessary to see it in 3D, you should find a Dolby Atomos theater for the full experience.