Tech advancements in the entertainment industry introduce “first of its kind” in more ways than we think – especially when we’re speaking in terms of image resolution. But the creators of D-TEC, a TV series that integrates narrative second screen content to expand the viewer’s experience, is a remarkable progression in how we could consume content in the near future. The idea is for viewers to watch on a TV in conjunction with a secondary device like a tablet or smartphone, which introduces new storylines and interactive materials that are synced to the main content. With its premiere in New York last October and another one in Los Angeles April 3rd at Regent Theaters, it’s an idea networks and studios should keep their eyes on.

The creators, Stephen Interrante, Joseph Saroufim, and Peter Saroufim, were presented with developing content for a second screen when Samsung introduced a contest at the New York Television Festival. After securing a spot as a top five finalist, the team pitched their pilot and won the $300,000 grand prize to produce their show. The narrative is a futuristic, neo-noir crime thriller about two partners at Outlook PI, a high-tech private detective agency. Andy Dearing (Casey Graf) has finally achieved his dream of becoming a private investigator. However, when assigned to his first murder mystery, Andy is forced to team up with the legendary Frankie Powell (Marguerite Moreau), an instinct-driven detective with a strong distaste for new technology. Ideologies quickly clash and the two gumshoes find that working together will be as complicated as the mysteries they face. “We are big fans of the sci-fi genre,” Joseph Saroufim says. “But the Samsung challenge lent to the genre itself. We thought about what would be the best way to make the second screen an integral part of the story, and one of the first images we thought of led us to our story taking place in the future.” The Saroufim brothers, along with Interrante, not only penned the story together, but they used their other talents to help finish the project as well. Interrante directed and created the VFX for the project, while Peter Saroufim worked the editing bay, putting the final shots together.

In preproduction, the creative team, along with producer Mark Zuckerbrow and co-producer Richard King, followed a set of guidelines and philosophies for their second screen coverage. “Our first impression was ‘I don’t know if it could work’. And secondly, ‘is it counterintuitive to storytelling’,” admits Joseph Saroufim. “So we created a set of ground rules and stuck to them. The second screen material just can’t be filler. It has to be information we want to know, and the information has to connect to the character.” Director Stephen Interrante adds, “This was a challenge from the start because there was no model to follow. We were the first ones creating this type of storytelling, but when we show it to people, they really like it, so it was a risk that worked out really nicely for us.” 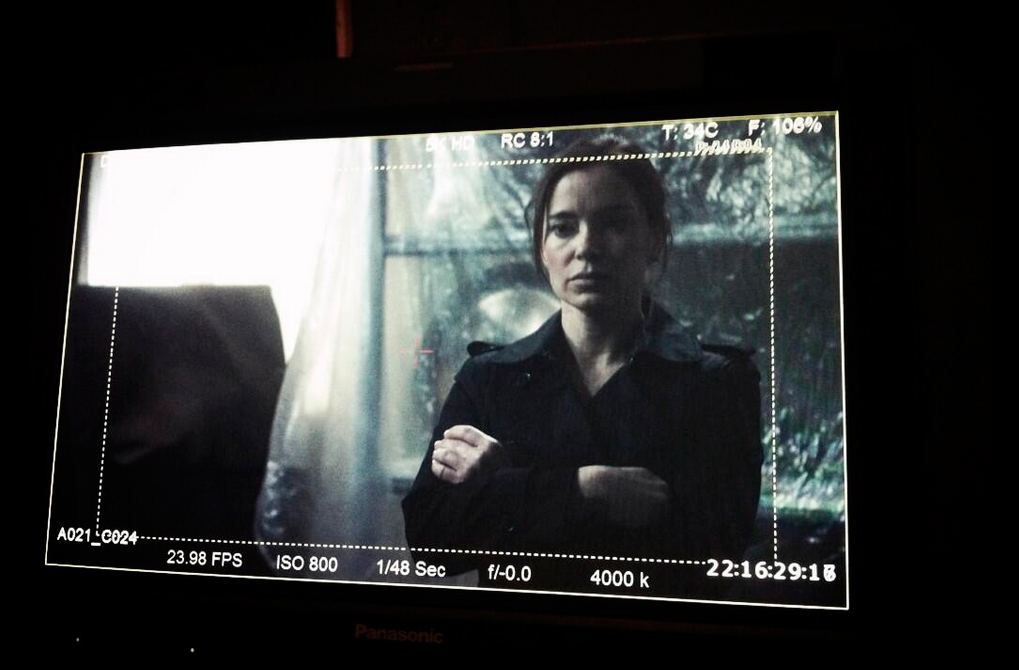 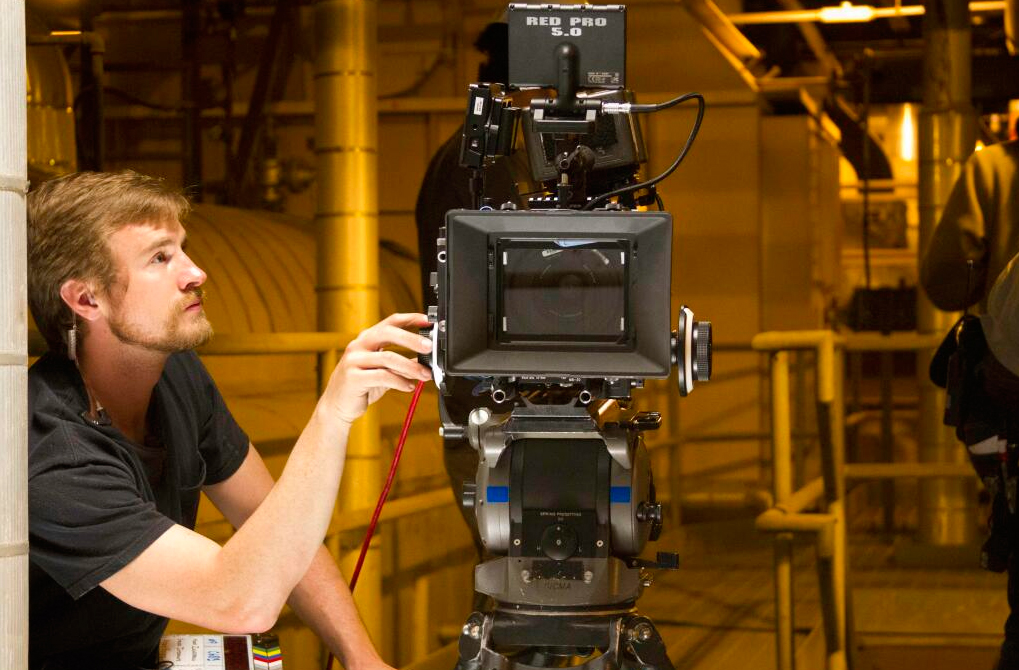 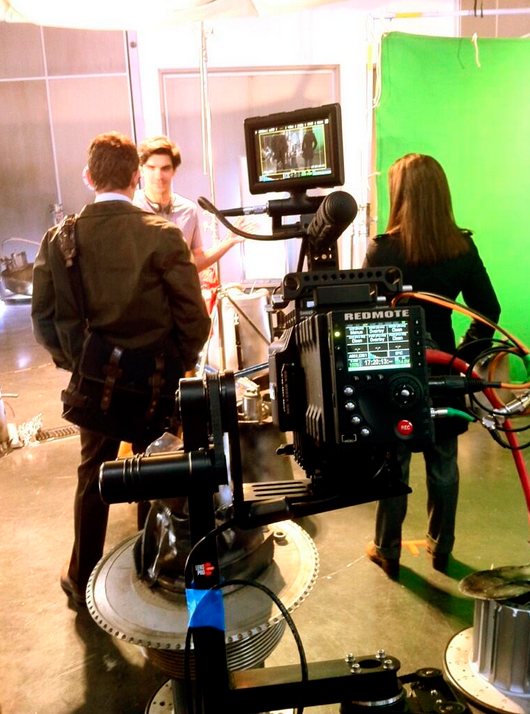 Going through the script line by line with producers, they came to a twelve day shooting schedule where cinematographer Adam Severi and director Interrante looked to the RED Epic shooting 5K to deliver the visuals. “People were very excited to be working on this project from the start,” mentions Interrante. “It was something new, and it was a huge challenge for producers since we didn’t want to cut any corners.”

Storyboards were a key part of the second screen process as well. “Our production designer, Shawn Bronson, created this retro style in a futuristic world,” says Interrante. “We wanted to explore that so every one of our storyboards had two frames to keep us conscious of anything we could possibly add to the second screen.”

Because the project was driven heavily by VFX, green screen played a role in production as well as additional cameras for covering second screen footage. “When you’re shooting for a second screen, it’s entirely different than traditional coverage,” explains Interrante. “Usually when two characters split up in a scene, you can shoot around certain things, but in our case, because scenes have to be synced up, we had shot everything in its entirety. Which in a sense means you’re doubling up a lot of shooting.” Joseph Saroufim notes, “There was a lot to accomplish and coordinate. The gadgets on the second screen are seen through the POV of our main characters, so we ended up using GoPros and DSLR cameras to get into some of the tighter storytelling places.” An early obstacle to overcome happened on the second day of shooting, where specific coordination was needed to sync the narrative to the second screen. “Most of our difficulties come when our two characters split away from each other,” says Interrante. “There’s a scene in a large facility between Andy (Casey Graf) and Frankie (Marguerite Moreau) where they are on two different screens, communicating with each other as they are running and performing stunts in various hallways. Everything needed to be mapped out and synced perfectly for the sequence to work.”

Over the course of shooting, like all good productions that take the time to plan, nothing happened unexpectedly to the team. “We really hit our stride and got into a rhythm of shooting in our system early on, and I think that helped us a lot,” says Interrante. When it came time for post, editor Peter Saroufim couldn’t have been happier with production’s results. “When I first sat down, I put together the facility scene. I had four screens of coverage to choose from,” says Peter Saroufim. “Coverage from the security cameras, another one of Frankie, and another of Andy. It was an interesting challenge to put them all together, but I was completely impressed that everything was in sync. It made my job a lot easier, and it couldn’t have been more fun.” I watched the final mix of the pilot episode at TibboSound Studios. It was here where I met the creators, along with re-recording mixer Stephen Tibbo, CAS and supervising sound editor Kunal Rajan. They were finalizing notes on various gunshots, glass breaking moments, and dialogue. The project had over four hundred visual effects shots coming in last minute, so the post sound team had their work cut out for them. As they pressed along the timeline, they watched sequences, paused, and then gave notes to Tibbo who quickly adjusted them in his Pro Tools workflow. “The second screen stuff they created is really cool, so we wanted to give everything a unique soundscape in the mix,” mentions Tibbo. “The guns are neat in that futuristic way too. So we looked to differentiate them from something other than what you would hear in a movie like Star Wars, for instance.” Trekking along the thirty-minute timeline, the creators alongside sound perfected the myriad of audio layers before exporting for the project’s debut.

“Putting the project together was a collaborative effort, and having our three different viewpoints allowed us to discuss ways to find the right decision for the show’s success,” says Joseph Saroufim. “We tried to be as judicial as possible and not overuse the second screen, but make it part of the storytelling. This way viewers can enjoy this new experience as much as we do.” You can keep up to date with D-TEC by following @DTECseries. Watch the D-TEC trailer.