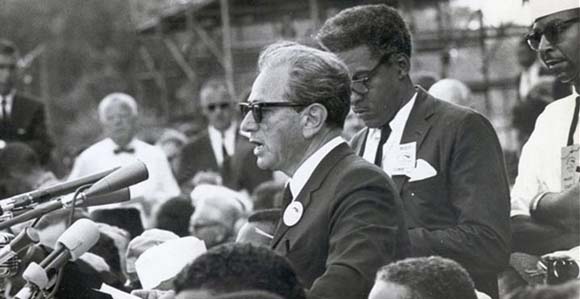 Maplewood, NJ — October 16, 2013 – R Squared Productions, a leading cultural storytelling multimedia production firm, today announced that its debut film, ‘Joachim Prinz: I Shall Not be Silent,’ will premiere at the New Jersey Jewish Film Festival at the New Jersey Performing Arts Center in Newark on Saturday, November 2nd. The film tells the life story of the famed civil rights figure who helped organize the March on Washington, in August, 1963, and who spoke just prior to Dr. Martin Luther King, Jr., when he delivered his stirring ‘I Have a Dream’ speech. The hour-long film articulates Rabbi Prinz’s message of not being “silent” in the wake of injustice, and is told through archival footage, memoirs, and the remembrances of his family and colleagues, including Georgia Congressman John Lewis.

Produced and directed by Rachel Eskin Fisher and Rachel Nierenberg Pasternak, ‘Joachim Prinz: I Shall Not be Silent’ is the initial film from the production company, which was founded to capture stories from the past with cultural and social relevance to today’s audiences. It is the first film to comprehensively chronicle and examine the life and mission of the famed rabbi and civil rights activist.

The film follows Rabbi Prinz’s life in Germany, and his subsequent expulsion from the country during the N*azi period due to his outspokenness against the regime, and the rabbi’s decision to devote his life to curing injustices in his adopted country, the United States. Prinz’s fight for justice and equality brought him to the Civil Rights movement in the 1950s in which he later played a leading role in the March on Washington. His timeless phrase, “neighbor is not a geographic term,” has been echoed recently by President Barack Obama.

The film, in which Prinz’s writings are read by award-winning actor Andre Braugher, and narration is deftly provided by Stephanie Nasteff, includes stills and passages from Prinz’s memoirs, and elegantly integrates archival footage from Weimar Germany; N*azi Germany; mid-20th-century Newark, and previously unseen footage of Prinz as well as footage of Prinz documents unearthed during R Squared’s research for the film. Rarely seen footage from the Civil Rights period also permeates the film. Emmy-award winning composer Ben Decter provided the score for the film. Montclair, New Jersey-based ACIEM Studios provided post-production services. R Squared raised funds through private individuals and through a Kickstarter campaign that exceeded its goal, with more than $20,000 raised and more than 200 supporters. R Squared also received a grant from the New Jersey Council for the Humanities.

“We are focused on capturing stories of the past that have great relevance to today’s audiences,” said Rachel Pasternak. “We are filmmakers, documentarians, and social scientists with interest in cultural, religious, and political themes that relate to today’s issues. We have a strong background in diverse cultures, and seek relevant angles to stories that bridge the past with today.”

“The life of Rabbi Prinz is a story that needs to be told; he may be the unknown hero in the American Civil Rights era, and we are the keepers of his flame,” said Rabbi Clifford Kulwin, rabbi at Temple B’nai Abraham in Livingston, New Jersey, where Rabbi Prinz previously presided. “This film is the beginning of a rebirth of Rabbi Prinz’s message, which is both timeless and timely.”

Rachel Pasternak, while pursuing her master’s degree in Jewish Studies from the Jewish Theological Seminary, obtained access to Rabbi Prinz’s private archives. Her work resulted in one of the first academic treatises on the life and career of Rabbi Prinz. Pasternak wanted to produce a play on the rabbi’s life and, through a mutual friend, she met Rachel Fisher, who shared an interest in telling the story Rabbi Prinz. They formed R Squared Productions to make the film, ‘Joachim Prinz: I Shall Not be Silent.’

“We were amazed that both of us – who are scholars of Jewish culture – knew relatively little of Rabbi Prinz. This was, to us, a signal that we needed to make a film to help restart the conversation on this remarkable man and his message,” said Rachel Fisher. “We felt that the rabbi’s story had been lost to history, and we found a community of people – including Rabbi Clifford Kulwin, who is the rabbi of Temple B’nai Abraham in Livingston, where Rabbi Prinz presided – who wanted to tell Rabbi Prinz’s story as well. The history of Rabbi Prinz is being written now. This film is the first step in telling a universal story of the quest for peace and justice.”

R Squared plans to develop broader “extended storytelling” projects, and ‘Joachim Prinz: I Shall Not be Silent,’ will be communicated through multiple platforms, including social media, word of mouth, and crowdsourced information. The company plans to develop school curriculum based on the film.

“My father was outspoken and a man of the world, and we see his work and his message as having great relevance to today’s audience, which needs to be reminded of our shared brotherhood,” said Jonathan Prinz, CEO of TransformationBranding, and son of Rabbi Prinz. “We are thrilled that this film is debuting during the 50th anniversary of the March on Washington. The march was a seminal opportunity for my father to express what he thought was the essence of religion and, in particular, Judaism. His involvement in the March on Washington was his fervent expression of the need for human dignity and justice.”

About R Squared Productions
R Squared Productions is a leading cultural storytelling multimedia production firm. The company was founded by Rachel Fisher and Rachel Pasternak, and strives to transmit stories from one generation to the next through multi-platform storytelling, including theatrical; television, web, and public display projects, as well as educational curriculum. For more information, please visit www.prinzdocumentary.org or connect with us on Twitter at #IShallNotBeSilent.