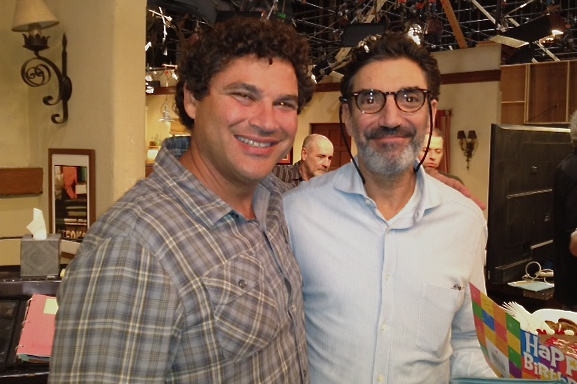 Cinematographer Steven Silver, ASC, was one of Two and a Half Men’s 4 Emmy nominations this year. Working his way up through the camera department as an operator on shows like Murphy Brown, Silver’s talents has landed him on several series as a DP, including Dharma & Greg, Still Standing and Big Bang Theory. I managed to sneak into his busy schedule to ask him about working on one of CBS’s biggest shows.

S&P: This is your seventh Emmy nomination for your work on Two and a Half Men, what keeps driving you at such a high level?
Silver: Chuck Lorre is an incredibly talented show runner and astute producer. We have worked together for the past sixteen years, nothing makes me happier than to have him come into one of our run-throughs where he seesthe sets and lighting for the first time and wow him. He is not easily impressed and it is not easy to do, but when we get it right, he really responds. It’s a great feeling.

S&P: Are you still working with Kodak’s Vision2 5299 35mm format using 3-perf negatives? What are the advantages of using this kind of workflow?
Silver: No. Kodak discontinued the ’99 so I switched over to their 5219. I always wanted to use that stock, it’s beautiful and suits the show, but in the past we could not afford it until they made us a deal we couldn’t refuse a few years ago. We are still on 3-perf. The usage area suits our 16×9 release format perfectly.

S&P: Last time we spoke, Panavision Gold Cameras with 11:1 Primo Zoom lenses were your setup of choice. Is this still the case? Have you brought anything new to set this last season?
Silver: Yes. I love working with David Dotson and Bob Foersch at Panavisoin. They provide amazing support and have become friends of mine over the years. We have added a 17.5-75 zoom lens as a backup for those rare shots and wider millimeter situations. 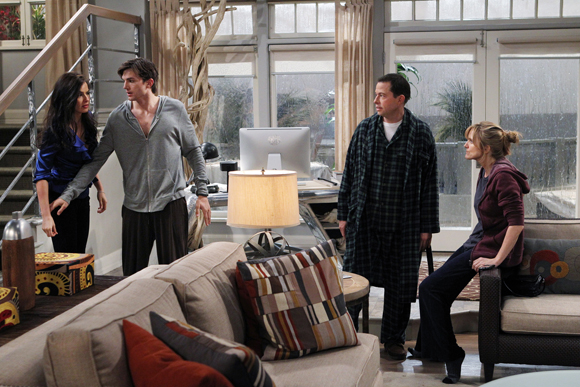 S&P: The mainstay sets of Two and a Half Men have their defined look. I’m sure tweaks take place with each week’s guest stars and day players, but tell us, how do you approach new swing sets? What’s your thought process there?
Silver: The first time I read a script, I clear my mind and try to visualize the mood of the scene.  This helps me leave the real world for a moment and engage my brain towards cinema fantasy.  I read it again. This time picturing the blocking of the actors as to where I think they should be in relation to the set.  I then build a shot sequence in my head, which helps me to quickly begin conversations with the other departments.  Then I can intelligently have an opinion on where and how I think the sets should be laid out, what the perimeters of the backgrounds may be for the art department, the size and scope for ordering extra men and specialty equipment, the list goes on…

S&P: Now that Ashton Kutcher has filled the shoes of Charlie Sheen — was there any significant lighting changes for the show?
Silver: When Ashton (Walden Schmidt) moves in to the beach house, he remodels the living room. The room color is repainted a much brighter (light gray) that changes the way I go about lighting that set. I project a softer fill light and use smaller amounts in order to lighten any shadows that fall on the walls when the characters are staged against them. 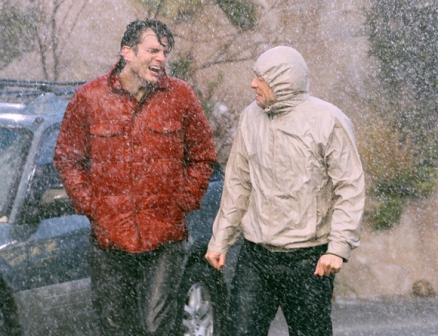 S&P: Sips, Sonnets, And Sodomy was the episode for consideration. There’s a torrential downpour scene that creates a pretty dangerous mudslide — what were some of the dynamics that needed to come together in order for all that to work?
Silver: My submission this year solely because of the enormity of the production as well as the variety of lighting opportunities that the script called for during this episode. I believe we demonstrated the ability to seamlessly navigate our camera work through some extreme special effects and environmentally unfriendly situations.

The interior sets for that week on stage had to be completely re-lit to satisfy this environmentally charged story. There is a storm in the daytime that knocks out the power in the city. Our concept was to bring the 5500 Calvin light in from the windows for an overcast rainy ambience and let candles around the rooms motivate subtle key lights from the front of the action. I believe the outcome was beautiful.

For the exteriors, we built a 90’ foot wide by 40 foot high muddy mountainside that gives away to the overly saturated conditions. This mudslide inturn washes Jon Cryer into a ravine where Ashton Kutcher saves him from washing away and out to sea.

All this filming was covered with multiple cameras (sometimes as many as six). Our four 35mm Pana-Gold film cameras, and in most situations, a digital Arri Alexa camera and a Canon D5 for post production plate work.

We shot the dark, stormy exteriors out on the Warner Bros. back lot in the middle of an extremely hot, sunny day. The effects department requested that our lighting be projected too, allowing their rain bars and Ritter fans to be stationed as close to the action as possible to provide a maximum effect. We flew four 40×40 frames of light grid on 160’ foot champion cranes above the set in order to stay unaffected by the rain and wind below. It was quite a fun day. 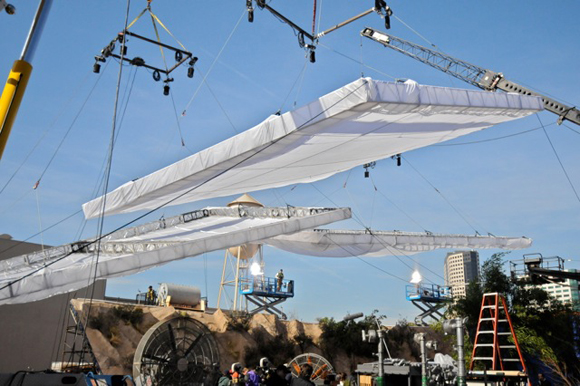 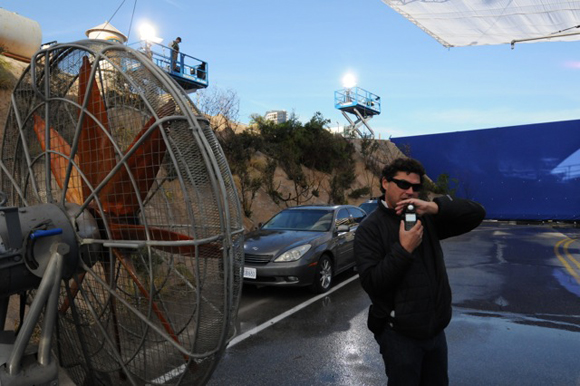 S&P: You shoot in front of a studio audience, what are some of the things you try to accomplish to keep them engaged during filming?
Silver: Certain scenes require many set ups and this might take awhile. We pre-shot those scenes the day before and do a quick edit. This allows those scenes to be shown on monitors to the audience in between the live show. We can move the story along faster and keep the audiences fresh, happy and laughing during the evening. On Two and a Half Men, the laughs are always live and being mic’d in real time. 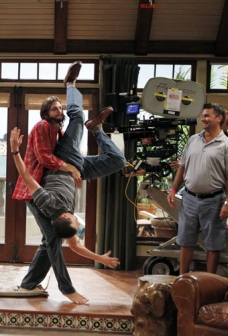 Walden does a little redecorating

S&P: Now starting its 10th season, how has your part in the final color grading process of the show evolved over the seasons?
Silver: One of my favorite parts of my job is color correction. We go back to the original negative and build the show scene by scene. In this process, you get another crack at realizing the images that you were originally going for and fine tune the mood, highlights, contrast, etc. In these sessions, we seamlessly match the cuts that are shot at different angles and sometimes on different days.

S&P: You’ve been working as a cinematographer for 20 years now. You were able to direct an episode of Dharma & Greg – Is that something you see yourself wanting to do more?
Silver: As a director, I was able to experience firsthand what I needed from all departments of production. I learned more that week how to better serve the directors, producers, and actors I now work with daily. I enjoyed directing, but I see myself as a cinematographer with a complete and special insight into the workings of the medium I love.

S&P: With such a rewarding career, what’s the area you’re still learning the most when you go to work?
Silver: New technology. In this new age, faster and sharper seemed to be viewed as better. I strive to remain in control of all the new advancements instead of the technology driving the aesthetic…

S&P would like to thank Steven for taking the time out for our readers. To find more about him you can check out his site or IMDB page. An all new season of Two and a Half Men on CBS will start this fall. The Creative Arts Emmys will be held September 15th, 2012 at the Nokia Theatre LA LIVE in Los Angeles.